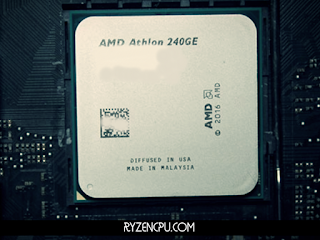 Today’s guest on RyzenCpu.com is a low-end AMD processor that is called the AMD Athlon 240GE. Experienced users would probably know what not to expect from this name. Thus, it is not generally satisfying for users seeking higher CPU performance. It relatively is one of the least powerful models among the processors of the Zen architecture. But it never means that the Athlon 240GE is a “bad processor”. It is all about what you need, you know. If you need some additional PC setup for less demanding works or you don’t need a “powerful” PC in the first place then the AMD Athlon 240GE is one of the best possible options in the market. At the end of the day, it is not wise to pay hundreds of dollars extra for a CPU you don’t need.

So, when it comes to the CPUs like the AMD Athlon 240GE the main question is;

Who Should Not Use the AMD Athlon 240GE

First of all, if you love to compare products of different producers, you should know that the AMD Athlon 240GE and its cousin (200GE) are targeting the low-segment Intel processors like; the Intel Pentium Gold G5400.

If you are planning to run massive games like GTA 5 on your system, you are reading the wrong article.It is also not likely to run 3D modeling software smoothly. Or you cannot expect a great render performance from this CPU. Of course, you can always support the CPU by integrating powerful parts but if you look for power then why would you need an Athlon CPU?

Keep reading to see the details about the specifications of the AMD Athlon 240GE.

240GE is a dual-core CPU with 4 threads (System Memory up to 2667 MHz). There’s no boost technology utilized here. And it has a 3.5GHz base clock speed. Besides, APU technology is used. So, there’s an integrated GPU on-board. Thus, we see 3 cores for the GPU. The GPU uses Vega 3 technology. Of course, it meets only the basic needs of a user in terms of graphics performance. You can still support the system with a better separate GPU.