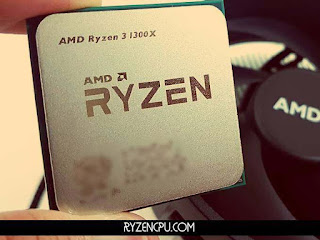 As some of you know, in one of our previous articles, we talked about Ryzen 7 1800X, which was the flagship product at the time that it was introduced to the market. And it was kind of the expensive member of the Ryzen family. But here, the AMD Ryzen 3 1300X comes as a powerful and affordable CPU. So, it is the CPU you need when you’re setting up a cost-efficient gaming PC.

It is a desktop CPU with a 3.5 GHz base clock frequency. The boosting capability allows you to reach up to 3.7 GHz frequency. Yet, if it is combined with a cooler better than the stock coolers, you can also reach up to 3.9 GHz clock rate. (There’s an unlocked multiplier for this processor) So while building a system with 1300X, you should choose the other parts wisely in order to maximize the performance. It uses the Precision Boost and the Extended Frequency Range to give you a smooth and a powerful experience even when running the hardest applications. Additionally, the AMD Ryzen 3 1300X has 4 cores + 4 threads. Its TDP is 65W (quite efficient value) and the max temp for the processor is 95°C.

Shortcoming: It would be better to see SMT (Simultaneous Multithreading) support here as we have for Ryzen 7 models.

Suggestion: ASUS Prime B350-PLUS would be a compatible choice for a system with 1300X especially for overclocking. (the AMD Ryzen 3 1300X has AM4 socket-type.)

As you know, in the market there are only two competitors actually. So, here we will say a few words about the Intel Core i3-7100 and i3-7300 models. The AMD Ryzen 3 1300X stands between those two Intel models in terms of performance and price. We can say that the Ryzen 3 1300X performs better than the Core i3-7100 on the other hand it’s cheaper than the i3-7300. Having said that, it doesn’t necessarily mean that the AMD Ryzen 3 1300X performs worse than i3-7300, so the determiner here is the affordability. And the overclocking capabilities of the Ryzen 3 1300X also makes it a better choice than the i3 models mentioned above.

First of all, we’ll list the system that we built for 1300X.

You can see it’s a quite powerful set-up.

Many of you would know that the results are quite sufficient to run games like GTA 5 at higher display settings. Additionally, you can see how well it performs according to its price tag. And yes, if you think like that it is absolutely true. You also get a wonderful experience while playing other popular games like PUBG or Battlefield 1.