AMD video story about working with Codemasters on DiRT 5 optimization for Radeon RX 6000. 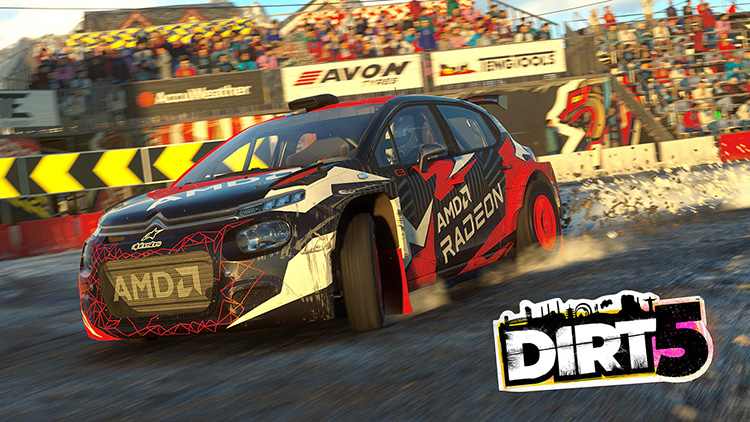 We have already written that DiRT 5 is included in a small number of games that have received support for ray tracing and other optimizations for new Radeon RX 6000 graphics cards thanks to participation in the AMD partnership program. Now the company has released the first video story about its cooperation with developers on next generation games.

This video is dedicated to DiRT 5 obviously, others will be released in the future. It notes that in cooperation with AMD studio Codemasters was able to add to their races shading technology with variable precision (Variable Rate Shading, VRS). VRS was introduced into the DirectX 12 graphics API in 2019. This technology is a functional analogue of NVIDIA Adaptive Shading and is designed to save graphics card resources. It allows you to reduce the load when calculating peripheral objects, low-value zones or fast-moving parts of the scene, while maintaining detail where it is most needed. The result is significant performance gains while maintaining almost the same image quality. In addition, developers with AMD support have added more precise and detailed ray tracing shadows to DiRT 5, as well as contact shadows (when objects shade themselves). The game uses calculations with an accuracy of 1 ray per pixel, which require noise suppression & ; AMD Shadow Denoiser technology is used for this purpose. The comparison, as in the first published screenshot, is not particularly convincing, but nevertheless.

The game also uses AMD FidelityFX Single Pass Downsampler (SPD) technology for lighting and post-processing; it is a single-pass downsampler that can generate up to 12 MIPmap levels in a single pass of a computational shader. This approach allows to avoid graphic pipeline downtime when moving the buffer to lower resolution or generating MIPmap chains. Finally, to increase realism, DiRT 5 uses AMD FideltyFX Ambient Occlusion shading model and other technologies. For all of them, the presented video provides comparisons. In general, AMD notes that the best game will show itself on a bunch of Radeon RX 6000 series graphics cards with Ryzen 5000 processors. The company also recommends installing the latest version of AMD Radeon Adrenaline 2020 Edition drivers. DIRT 5 will be released on November 6 on PC, Xbox One and PlayStation 4, while on Xbox Series X and S November 10, and on PlayStation 5 November 12.