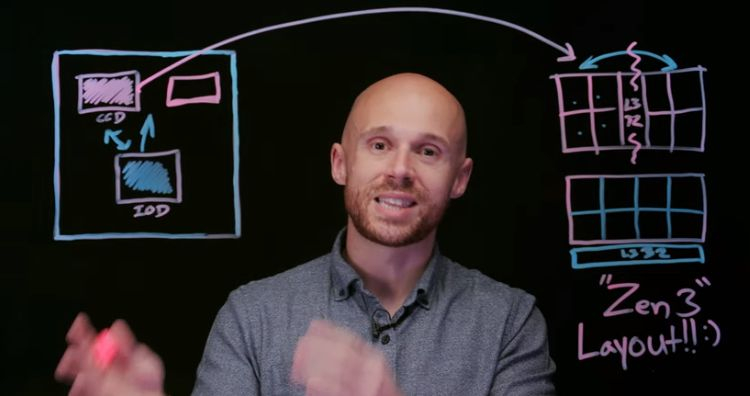 Ryzen 5000 processors with Zen 3 architecture will go on sale from day to day, so AMD decided to remind about the important layout advantage that distinguishes them from their predecessors. All eight cores on the crystal are combined into one complex, they have equal access to 32 Mbytes of third level cache memory.

The proximity of the moment when the first Ryzen 5000 processor reviews were published made AMD's Technical Marketing Director Robert Hallock to demonstrate his visual skills once again. Touching upon the color markers, he schematically depicted the differences in core layouts between processors with Zen 2 and Zen 3, respectively, on a transparent panel.

If the former divided a crystal with eight computational cores into two equal complexes of four cores, each of which addressed its own section of 16 Mbytes of cache memory of the third level, in processors with the Zen 3 architecture all eight cores belong to a single complex, they are equally available to the entire volume of the cache of the third level, which is still the same 32 Mbytes that were previously achieved in the aggregate.

Previously, it was necessary to use the capabilities of a crystal with I/O logic if the cores were located in different complexes to address one core to another within a chip. Now, all cores within the same complex can address each other directly. According to Robert Hallock, it significantly reduces delays in work in digital content creation applications or games. Based on the experience of previous AMD presentations, it can be assumed that this will not be the only story about the features of Ryzen 5000 processors, because there are still a few days left before the first official reviews.