How to Choose the Right AMD Ryzen 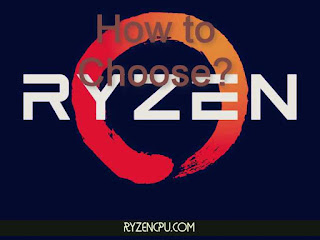 How to Choose the Right AMD Ryzen

First of all, including how you choose the best Ryzen CPU for you, choosing any PC part mainly depends on a few criteria. Price and performance are essential determiners. Besides, everyone has a goal while building a PC setup. Nowadays, gaming is the number one reason for many enthusiasts to create a setup for themselves individually. Other than that, PC systems may have various objectives to serve. You see some pre-built PCs focusing on daily office work while some of them are designed for high-end needs, like streaming, creation, or render tasks. Some quite popular PC models are exclusively built for high-quality gaming purposes. People are trying to find the best model that fits their needs. Of course, while you are building your system, it is no different. Either way, you have to first prioritize your objectives. You need to know what purposes your PC should serve.

After you are done with the purpose and the needs. You are now halfway through choosing the right AMD Ryzen CPU for you. It is all about your budget and the available options in the market now.

What Are the Important Specifications of a CPU

The Core and Thread Count:

If we are talking about a humble PC at the office, even two cores would do the job. But when you want to go further, for example, if some gaming is involved, you should consider 4 cores and above options. Or if you want to go for the AAA type of gaming, you may want to check the new Ryzen 5000 series. Ryzen 9 5900X and Ryzen 9 5950X are at the top of the AMD Ryzen desktop CPU family now.

or the APUs are the CPUs that have integrated graphics units on-board. It is a good option for less demanding tasks. They erase the need for a discrete GPU for small work. Therefore, you won’t have to pay for another PC part extra. The AMD Ryzen family has some APU models that are generally considered budget CPUs. Yet, again, if you want some higher stuff like gaming, modeling, streaming, etc. just try to get a discrete GPU and a powerful Ryzen. As we said, it is about your needs and purpose here.

This one has a quite simple explanation; the larger the cache size, the faster the data is processed. The L1 is the fastest cache. Therefore, you would not see the L1 size as high as the L2 or the L3. Because of their working protocol. The function of L3 is to feed L2. And for the L2 the task is to feed the L1 and finally the L1 is feeding the CPU.

This is a separate topic for a much bigger article. Yet, we will try to explain it briefly with the Zen architecture examples.

Zen 2 - 7nm norm, 2019. It has several advantages over the previous generations.

Zen 3 - The brand new Ryzen architecture. It is a lot faster than the predecessors. It is now one of the fastest architectures in the entire CPU market.

In case you wonder, the difference between 12nm, 7nm, and 14nm affects almost all performance. It's better to have a chip manufactured according to 7nm standards than to 14nm process standards. Simply because there are some significant advantages like the smaller size of transistors. This means basically that they consume less energy and they provide faster processing. That’s why the Ryzen developers are trying to reduce the size of the transistors.

And there is the socket or connector for the CPU. Many people wonder which socket is better for the CPU. The main thing here is the compatibility of the CPU socket type with your motherboard. If it is compatible with your current motherboard, it helps save money. The other manufacturers and AMD generally try to design new processors that are compatible with connectors on older motherboards. However, it is not always the case, especially when you have a very old motherboard.