Intel promised that Ice Lake-SP processors will be faster than 64-core AMD Rome. But AMD is on the way to Milan. 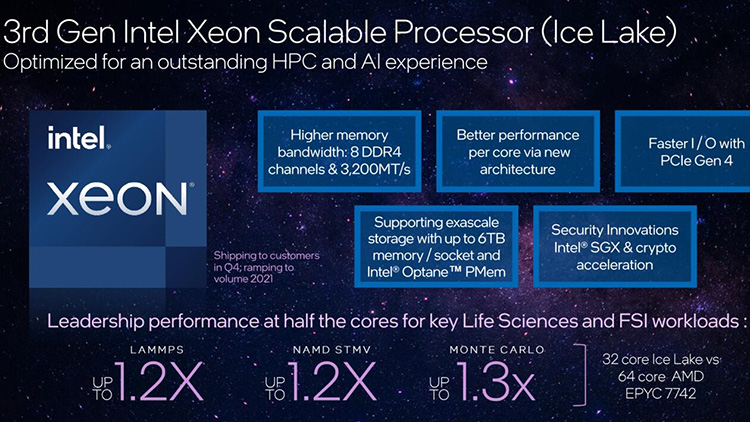 Intel Xeon Scalable processors remain the basis for building HPC and cloud systems for tasks using artificial intelligence. In addition to support for AVX-512, DL Boost and Optane PMem instructions, the new Ice Lake-SPs will be able to offer an increase in the number of executable instructions per clock (IPC) around 18 %. Among other benefits, it allows, according to Intel, its 32-core chips to outperform AMD Rome's 64-core solutions.

Of course, we are talking about specific tasks that take advantage of Intel's instruction sets like AVX-512, but nevertheless. Recall: Ice Lake-SPs will get extended memory bandwidth (8 DDR4-3200 channels, up to 6 Tbytes of RAM per contact pad) and increased performance in the AVX-512. Depending on the task, the new chips will bypass the previous generation of Cascade Lake in popular loads by 1.2–1.6 times. According to Intel, when evaluating the performance of floating point computing in SPECcpu2017 (fp), the increase in new processors is impressive 38 % compared to its predecessors on the Skylake architecture with the same number of cores at the same clock speed.

Anyway, Intel also has to follow the AMD kilwater and increase the number of cores. If previously the company offered a maximum of 28 cores, in Ice Lake-SP company is no longer shy 32 cores with a base frequency of 2.2 GHz and an unknown TDP. And recently there were rumors that the most expensive offers of the family will offer 38 cores with TDP over 200 W.

In this quarter, Intel plans to deliver the first processors to HPC customers, and a full-scale launch will take place in the first quarter of 2021. AMD's opponent by that time will be not the processors of Rome generation, but the next one, Milan. In them, AMD has optimized the cores, cache operation, improved the memory controller, reduced latency in all weak points. And the improved technical process will allow increasing the frequencies. All this may further shift the scale in favor of AMD in the HPC segment, but it will still be very difficult for AMD to fight against Intel's almost monopoly position in this sector.