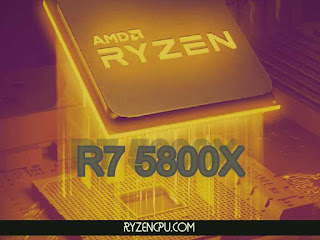 As many of you know, the Ryzen 5000 series newly launched. And one of the most attractive models from the new series is the Ryzen 7 5800X. That is, mainly because it is not the most expensive option among the others while it still has a stunning performance capability coming from its amazing specifications. Of course, it is not easy to decide which one is the best, as always. Some may think of price/performance more than anything while some others are just interested in building the highest performing system around a Ryzen 5000 series CPU. Yet, we can already say that the Ryzen 7 5800X meets the “elite gaming needs” you expect from a CPU. And it seems like it will continue to do the same for a long period. So, for some enthusiasts, this type of CPUs are considered a kind of investment as well.

First of all, this is a new processor that is based on Zen 3 7nm architecture. And AMD is improving the IPC whenever a new architecture is created. For example, we saw around a 50% rise in performance when the Zen/Zen+ architecture was launched. Again, with the development of Zen 2, we surely noticed the performance of the Ryzen CPUs getting better and better in many ways. Today, we see an overall increment of 19% IPC performance in the 5000 series, including the Ryzen 7 5800X. And of course, the gaming performance of the Ryzen 7 5800X is now significantly better than its predecessors. It is because we have a lot more powerful single-core experience now, compared to the previous models of the same Ryzen CPU line. Therefore, of course, that applies to general processing performance, as well.

The R7 5800X is a CPU designed genuinely to offer higher FPS ratings and a better gaming experience, overall. Therefore, the specifications also make the CPU eligible for creator tasks such as encoding and rendering.

The biggest change that the new Zen 3 microarchitecture has brought us is probably seeing the one 8-core CCX instead of two 4-core CCX. Before that, the four cores used 16 MB of the total L3 cache, which resulted in 2x 16 MB of L3 cache on the CCD. But now, with the Zen 3 architecture, AMD switched to a CCX with 8 cores that used 32 MB of shared L3 cache.

The Ryzen 7 5800X also benefits from the contemporary extensions and technologies like the Precision Boost 2, SMT, and AMD Ryzen VR-Ready Premium.