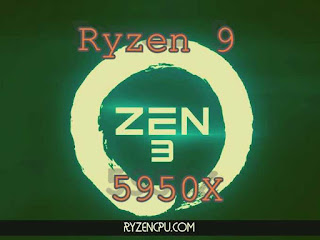 Since the launch of the first Ryzen CPU with the innovative Zen architecture, the company keeps improving the abilities of the Ryzen family with every new design. Ryzen 9 5950X is an example of this continuous improvement. Firstly, the Zen 3 microarchitecture has brought so many advantages to the newly launched Ryzen 5000 series compared to the previous series. Needless to say that the unique and precious member is now the 16-cored, 32-threaded giant Ryzen 9 5950X. The core and thread counts are more than ever you have seen so far on a Ryzen processor.

In the Zen/Zen+ and Zen 2 versions, we were used to seeing the multi-threading developments over the focus on single-core performance. However, with the launch of the Zen 3 and the Ryzen 5000 series, we are now seeing the focus of the development has shifted from multi-threading to single-core performance enhancement. Of course, this is very exciting for PC gamers. And it sure will be targeting more and more gamers after that.

So, what are the specifications that make the R9 5950X that powerful?

First, we know that we have a unique Zen 3 7 nm architecture used in the 5000 series. And it gives an increased IPC performance while providing a reduced latency coming from the new CCX design. Speaking of which, the Ryzen 9 5950X has the crazy 64 MB L3 cache and 8M L2 cache, in addition to those renovations. Besides, we see the highest core and thread numbers on the R9 5950X gaming processor. 16 cores and 32 threads are working in quite a harmonious way thanks to the upgrades that the new Zen 3 architecture has brought and thanks to the useful AMD technologies and extensions such as the Precision Boost 2 and the SMT.

Speaking of the Precision Boost 2, we have a 3.4 GHz base and 4.9 GHz max boost frequencies. Needless to say that the frequency aspect is also groundbreaking here. It is sure to be the best gaming CPU in the Ryzen family so far. Besides, it is eligible for different hard works like streaming, rendering, or some other creative tasks.