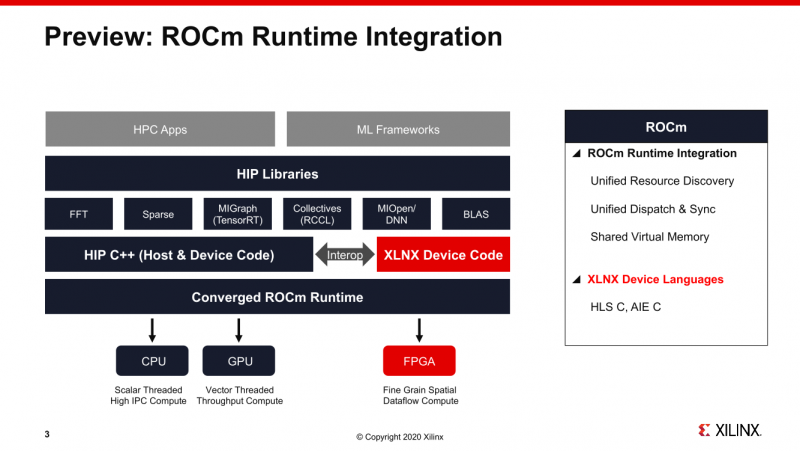 Currently we can say that computing devices of various types of & ; CPUs, GPUs, FPGAs, DPUs and other gas pedals; exist almost separately from each other. And every case that requires them to work together has to be considered separately. However, the future lies in convergence: it is much easier and more profitable to have a single open software platform that allows you to easily combine different gas pedals, making up a system that can optimally solve its tasks. Intel promotes oneAPI as a single, universal platform for development for all computing platforms at once. AMD has a ROCm project, which allows to combine the efforts of CPU and GPU, and now & ; although the deal is not fully closed & ; FPGA Xilinx. At SC20, the companies held their first demonstration of the work. Xilinx Alveo gas pedals, as well as any gas pedals based on a fairly complex FPGA, have a wide range of applications, from pure computing tasks to auxiliary, such as maintenance « smart » network connections and work as « data coprocessor » (DPU). The essence of the demonstration conducted by AMD is that due to the PCIe (Address Translation Service, ATS) address translation service Alveo boards get access to memory resources of other devices, be it system processors or GPU-accelerators. AMD ROCm platform allows to unify such processes as detection and reservation of FPGA resources in Alveo gas pedals. This ensures secure isolation of memory resources for each user, synchronization of Alveo and Instinct gas pedals, and the same mechanism is used to distribute the load of user requests as for Instinct boards. This approach should really simplify and unify the creation of next generation HPC systems that will combine different gas pedal types. You can learn more about ROCm technology at AMD website. Since the platform is open, you should expect new code to appear in ROCm repositories on GitHub.