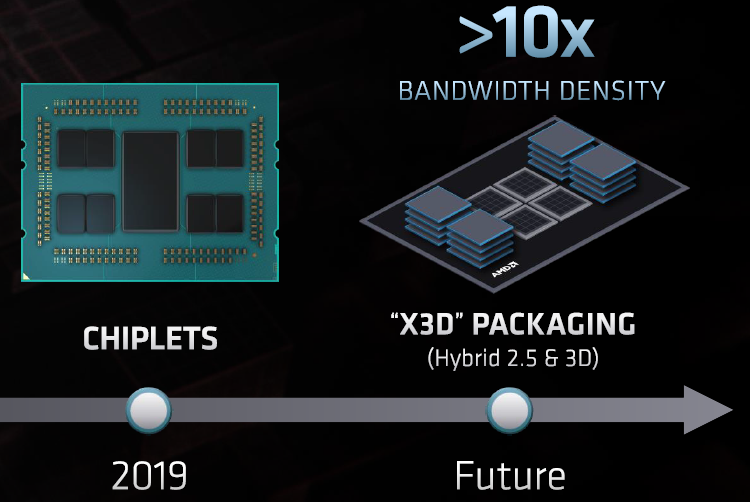 It's not the first year AMD uses multi-crystal layout when creating its CPUs, and in the segment of graphics processors it started to use memory like HBM quite a long time ago. In the future, it is expected that AMD products will move to a more complex spatial layout, the main partner on this path will be the Taiwanese company TSMC.

The publication Nikkei Asian Review, citing knowledgeable sources, said that TSMC plans to adapt three-dimensional spatial layout technology for Google and AMD. For this purpose, a new enterprise is already under construction in Miaoli, Northwest Taiwan, which will begin in 2022 to deal with chip packaging for select customers. AMD and Google are striving to be the first TSMC customers in this area, and therefore are already actively cooperating with a Taiwanese partner. If in the case of AMD everything is clear enough & ; the company does not want to lag behind Intel in mastering the spatial layout, the participation of Google in such an initiative may come as a surprise to many. As the source explains, the American Internet giant plans to entrust TSMC with the production of its own chips for automotive autopilot systems, and these chips will use the complex spatial layout to increase the density of integration elements. Other potential TSMC customers in this area include Apple and NVIDIA. TSMC officials already said at last quarter's conference that the share of revenue from packaging services for semiconductor components will increase in the coming years. TSMC competitors are not sitting idly by either. If Intel and Samsung are going to use the spatial layout mainly for their own needs, China's SMIC is trying to develop in this area in order to serve its customers. Naturally, the U.S. sanctions against this company will significantly complicate this task. Apple's chip-packaging needs are already being served by TSMC in Taoyuan in northern Taiwan, and enclosures for chip-packaging services are being built next door to a 5nm facility in Taoyuan in the south of the island. TSMC cannot replace all chip packaging manufacturers, but it expects to entice the most demanding customers with large budgets.