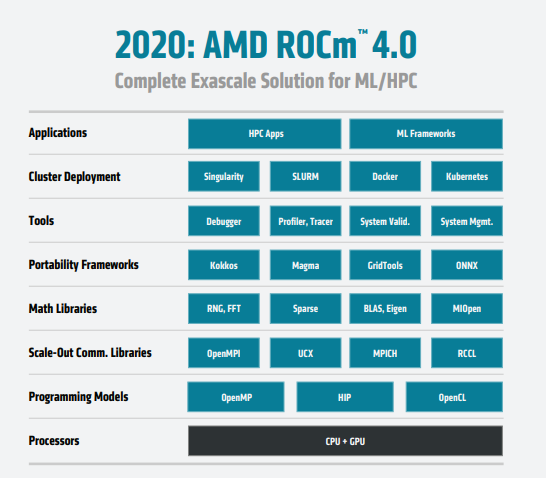 A little over a month ago AMD Instinct MI100 accelerator was announced. But software part in the form of Radeon Open eCosystem 4.0 (ROCm 4.0) appeared only now. ROCm & ; it is a hyperscale open-source platform designed to accelerate computation by combining chips of different classes (CPU, GPU, FPGA, etc.), which does not depend on programming language.

The main feature of ROCm 4.0 release is support for CDNA architecture, on which MI100 is based. In addition, ROCm 4.0 also includes various component enhancements to prepare it for «e era of exascale computing» and use in future supercomputers based on AMD solutions. The first of these will be the 1.5 Efflops Frontier, for which preparatory installation work is already underway. Also announced in the new release is support for BFloat16, multiple GPUs, improved RAS (reliability, availability and maintainability), compatibility with Mesa media stack and enhancements to the GPU debugger. More information on ROCm 4.0 is available on GitHub. Interestingly, Vega (GFX9) and CDNA are announced as supported GPUs, while older Polaris and Hawaii (GFX8 and GFX7) should work with the new stack, but their full support is not guaranteed. And the new RDNA Navi architecture (GFX10) does not seem to be supported at all, at least officially. That said, the latest release of Radeon Software for Linux with RDNA 2 support includes an OpenCL driver based on ROCm as well. So, in theory, there is compatibility, but for some reason it is blocked programmatically or limited.