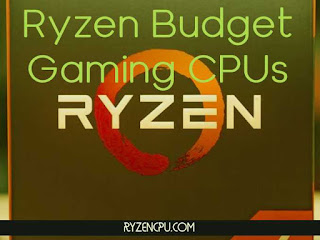 Everyone would agree to the fact that building a system with a limited budget is a very tough process sometimes. That’s one of the reasons why companies produce some relatively lower-spec CPUs at cheaper prices. Yet, cheaper does not mean weak or useless, in any sense. Because if you choose your system parts according to your actual needs, you get the performance you expect. That’s why in this article we are going to inform you about the best AMD Ryzen gaming processors for lower budgets. For many enthusiasts, the CPUs mentioned here are already known for being budget gaming CPUs.

AMD Ryzen 3 1300X, a desktop CPU, one of the best budget processors according to the various user and expert reviews. You can also figure out this fact yourself by just looking at the key features of it. Here is a full 4-core CPU with a base clock frequency of 3.5 GHz and a max boost of 3.7 GHz. It is a well-designed CPU for daily tasks. And when combined with a discrete low to mid-range GPU, you could enjoy 720p gaming too. Of course, it is not a good fit for many of the contemporary popular AAA games.

AMD Ryzen 3 2200G, on the other hand, allows you to do so much more with one CPU. We know it is not for advanced gaming. So, it is similar to the Ryzen 3 1300X in terms of key specs. However, It meets the budget system needs. The main reason for that is, it carries an integrated graphics card, allowing you to play some oldie-but-goldie games. In case you wonder, the integrated GPU is the Radeon Vega 8. And of course, you can always add a more powerful discrete GPU to your R3 2200G system.

Now, we have something really powerful. It is the Ryzen 5 2600, another well-designed desktop CPU from AMD. It has a relatively lower price. However, it is a 6-cored, 12-threaded CPU. And it is kind of a famous CPU for these reasons. So, if your budget is limited, this is one of the best options you would get. With the right graphics card, it can run many popular games at 1080p for a long time from now. It has a base clock frequency of 3.4 GHz and a max boost speed of 3.9 GHz. Additionally, the L3 cache is 16MB. It has built on 12 nm CMOS and it is a member of Pinnacle Ridge, Zen+ architecture.

For some more advanced gaming, we have the AMD Ryzen 5 3600. We see that the 3000 series has brought a significant increase in IPC, reduced workflow, and increased energy efficiency, in general. And this upgrade has provided useful improvements to the Ryzen 5 2600 where single-core performance is required, bypassing it with a large margin for games and other tasks. It is one of the most popular processors of 2019, with a clock speed capable of rising to 4.2 GHz in the boost mode.