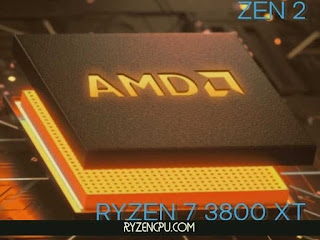 Ryzen 7 3800XT is a globally famous gaming CPU with 7nm Zen 2 architecture. It started to gain popularity from the launch date. Even today, while the internet is full of Ryzen 5000 news, we see the Ryzen 7 3800XT in the top-selling desktop CPU lists on various web sites.

In the last three years, since the release of the first Ryzen, changes in the desktop processor market have been much more productive. AMD has imposed a nuclear race on the competitor. In some cases, some say Ryzen desktop CPUs are winning the race. Of course, there’s still a fierce competition and it’s not easy to call one of them a true winner but from the Ryzen perspective, things are going well so far. Offering more cores for relatively cheaper prices is one of the key factors here for AMD.

The Ryzen 7 3800XT, as a desktop CPU, almost completely fits in the description above.

So, what are the key specifications of the Ryzen 7 3800XT?

So, the main characteristics of the Ryzen 7 3800XT shows that it is a powerful enough gaming CPU when combined with a mid to high-range graphics card. It is basically an 8-core CPU with support for important SMT technology on the Matisse core. Additionally, it is equipped with 32 MB of L3 cache memory. It utilizes the PCIe 4.0 technology, which is good for both current and the future gaming system setups. The Ryzen 7 3800XT, operating at a base frequency of 3.9 GHz. has a max boost speed of 4.7 GHz. The AM4 socket of the CPU gets well along with X570 and B550 motherboards.

A note for the enthusiasts: R7 3800XT’s multiplier is unblocked and it comes with AMD Master Utility.