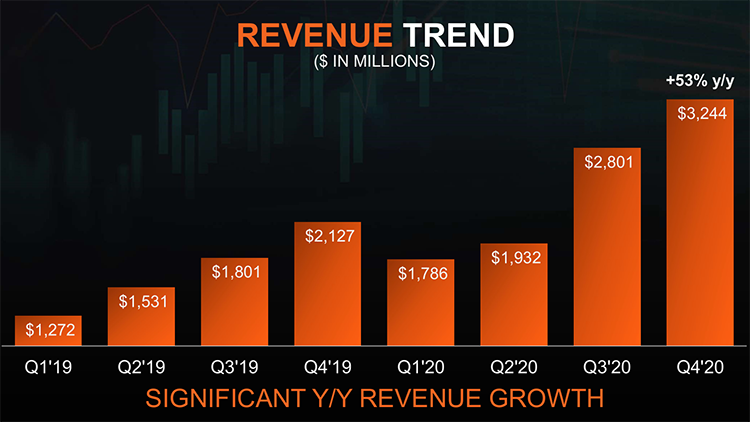 AMD has released its financial results for the fourth quarter and for the whole of last year, showing unprecedented leapfrogging. Revenues grew in all columns of the report: the company strengthened its position both in the customer product area and in the enterprise, embedded and semi-custom solutions segment. As a result, AMD was able to report quarterly total revenue in excess of $3 billion for the first time.

AMD's revenue for the fourth quarter of 2020 was $3.24 billion, up 16% from the third quarter and an impressive 53% from the fourth quarter of 2019 & ;. Meanwhile, AMD's full-year 2020 revenue reached $9.76 billion, an improvement of 45 % on 2019. Excluding expenses, the result was a quarterly profit of $1.78 billion, while for the full year the company's earnings were $2.49 billion, which in both cases represents hundreds of percent growth in both quarterly and year-to-date terms.

The main contributor to AMD's revenues in the past quarter was the client processor and graphics product segment. Quarterly revenue in this area & ;$1.96 billion, indicating growth of 18 percent compared to both the third quarter and the fourth quarter of 2019. Growth in this segment was driven by outstanding sales of Ryzen processors. However, the increased share of mobile offerings in AMD's sales has resulted in a slight decrease in the selling price of the average processor compared to a year ago. But the Zen 3 architecture carriers have started to smooth out this negative trend for the company, and in quarter-on-quarter comparisons, the average selling price has returned to growth. In the server, embedded and semi-custom solutions segment, where AMD includes not only EPYC processors but also chips for gaming consoles, revenue for the fourth quarter reached $1.28 billion, indicating a 13% increase from the previous quarter. But if you compare that figure to revenue in the fourth quarter of 2019, the increase is 176%, which, as you can easily guess, is due to the release of the new generation of Microsoft and Sony game consoles. However, AMD also mentions new EPYC processor deals for Alibaba, AWS and Oracle, for example.

Naturally, during the quarterly report the topic of shortages could not be avoided. According to the head of the company, Lisa Su, the shortages primarily affect products for gaming applications (CPUs, GPUs and console chips) and low-cost solutions. Demand clearly outstrips supply, but the situation will not improve until TSMC gets additional production capacity, which will have to wait at least until mid-year. For the first quarter of 2021 AMD predicts to keep revenues at the assumed level of $3.2 billion, and for the entire coming year the company plans to earn more than in 2020 by 37%. Four factors should help AMD achieve these targets. First is widespread adoption of Ryzen 5000 mobile processors, which are already used by notebook makers twice as much as their predecessors at launch. Secondly, growth of sales of Radeon RX 6000 series graphics solutions with new RDNA 2 architecture, which will be added to the range in the first half of the year. Thirdly, the upcoming release of the EPYC Milan generation processors in March. Finally, increased sales of semi-custom chips for gaming consoles in the first half of the year, which is predicted to be a somewhat unusual trend. After the quarterly report was published, AMD's share price remained virtually unchanged, as the results were fully in line with investors' expectations. Intel shares also did not show a pronounced reaction.