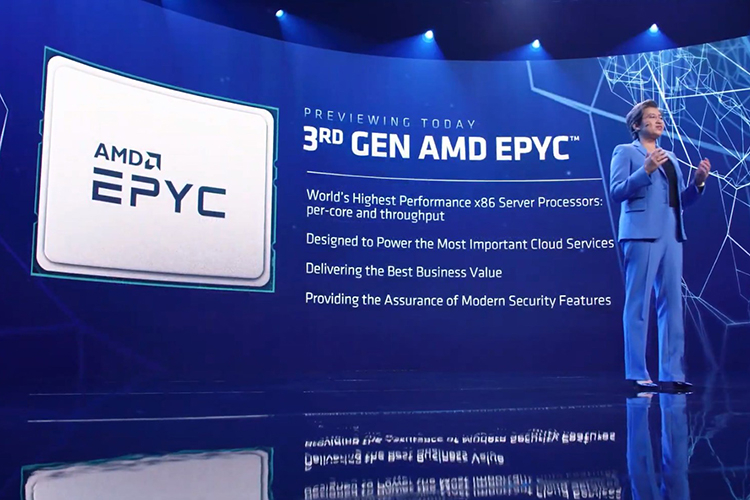 AMD is bringing processors based on the Zen 3 architecture to market a little slower than one would expect. So far, desktop and mobile Ryzen 5000s have been introduced, but no HEDT or server carriers of the architecture have been released. Nevertheless, today during a presentation at CES 2021 AMD CEO, Lisa Su, briefly mentioned future Milan generation EPYCs, which will find use of Zen 3 cores.

EPYC (Milan) processors are expected to be the logical successor to the current EPYC (Rome) processors, retaining compatibility with the existing processor socket. What is expected is a change from the Zen 2 core architecture to Zen 3, with a natural 19% increase in IPC, but no dramatic changes in the number of cores, memory support or PCI Express. That the release of the EPYC (Milan) processors is just around the corner was confirmed today at CES 2021 by AMD CEO, Lisa Su. During her presentation, she demonstrated how a dual-processor system with 32 cores of Milan performs when simulating weather phenomena in the dedicated WRF software package, which is widely used in the industry. The simulation speed was compared with a similar task in a dual-socket system with Intel Xeon Gold 6258R processors (28 cores, 2.7–4.0 GHz).

AMD claimed that when simulating a 6-hour weather pattern over the continental US, the AMD system was 68% faster than the Intel system.

As indicated, AMD plans to announce details of next-generation server products and ecosystems in Q1 2021.