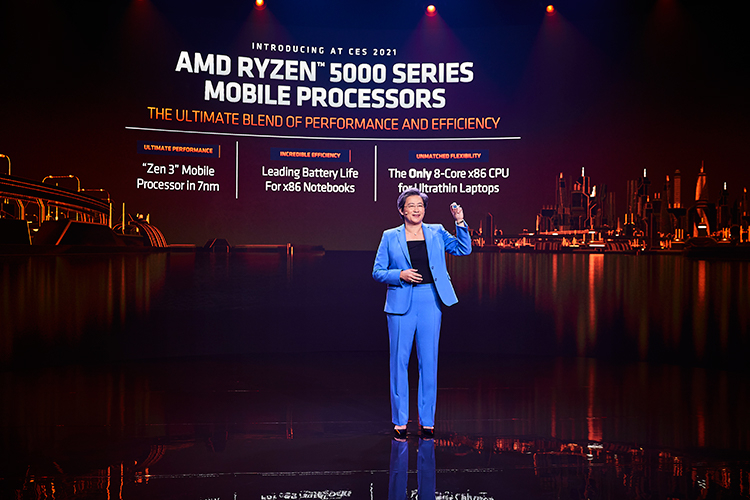 As expected, as part of its presentation at CES 2021, AMD today announced its new Ryzen 5000 family of mobile processors. It includes 10 processors with Zen 3 architecture, codenamed Cezanne, as well as three models of chips with Zen 2 architecture, known by the codename Lucienne (Renoir Refresh).

The Ryzen 5000 CPUs released today are divided into two classes. First class H-processors, based on the new Zen 3 architecture, with up to 8 processing cores and equipped with Vega graphics core. These processors have a 35W or 45W thermal package and are aimed squarely at gaming notebooks with discrete graphics. The second class  -energy efficient U-processors, which are based on Zen 3 and Zen 2 architectures (depending on the model), usually have fewer cores and lower operating frequencies, and are enclosed in a 15 watt thermal package.

The Ryzen 5000 H-series lineup is as follows:

The 45+W HX processors are designed for high performance gaming notebooks, while the HS processors, with reduced 35W estimated heat dissipation, deliver H-series performance in a slimmer, lighter package. All Cezanne mobile processors are based on a monolithic 7nm die with 16 Mbytes of L3 cache like its predecessors. The graphics core remains the same, it is the same Vega with eight CUs that was used in Renoir mobile processors (Ryzen 4000). So, the performance gains in this case will be mainly due to the introduction of Zen 3 architecture, doubling the L3 cache and a rather noticeable increase in marginal clock speeds. Speaking of performance, AMD noted that the new flagship Ryzen 9 5980HX processor is capable of a 23% increase in single-threaded performance and a 17% increase in multi-threaded  compared to the previous generation Ryzen 4900H, making it suitable for both gaming and content creation applications.

The Ryzen 5000 U-series power-efficient processor lineup is as follows:

A lot of new U-series models with 15W heat pack look like a rather strange mix of Zen 3-based Cezanne and Zen 2-based Lucienne (Renoir Refresh) CPUs, which differ significantly in characteristics like L3 cache size. In fact, we are only talking about two really new models - the eight-core Ryzen 7 5800U and the six-core Ryzen 7 5600U, while the other processors are slightly improved in frequency from the Ryzen 4000 series.

Not surprisingly, when talking about the benefits of the Ryzen 5000 U-series, AMD focuses specifically on the Ryzen 7 5800U with Cezanne design. For such a CPU compared to the old Ryzen 7 4800U, a 16 percent improvement in single-threaded performance and a 14 percent boost in multi-threaded performance is promised.

Mobile computers built on Ryzen 4000 processors have become very common in the past year. According to Mercury Research, AMD's market share of notebook processors reached 20.2 percent by the end of the third quarter, a historic high for the company. The new Ryzen 5000 processors should strengthen AMD's position by introducing a more advanced architecture and increasing performance and efficiency. However, this year the competition in the notebook market will be fiercer because of interesting offerings from Intel as well. The quad-core 35W Tiger Lake for gaming notebooks was unveiled yesterday and Tiger Lake with eight processing cores should be out by the end of the first quarter. The new laptops based on Ryzen 5000 mobile processors will be available from major manufacturers including Asus, HP and Lenovo during the first quarter of 2021. And for all of 2021, AMD expects to release a broad range of more than 150 consumer and commercial laptops based on Ryzen 5000 mobile processors. Also in the first half of 2021, Ryzen PRO 5000 mobile processors with additional security features are expected to be released, orie