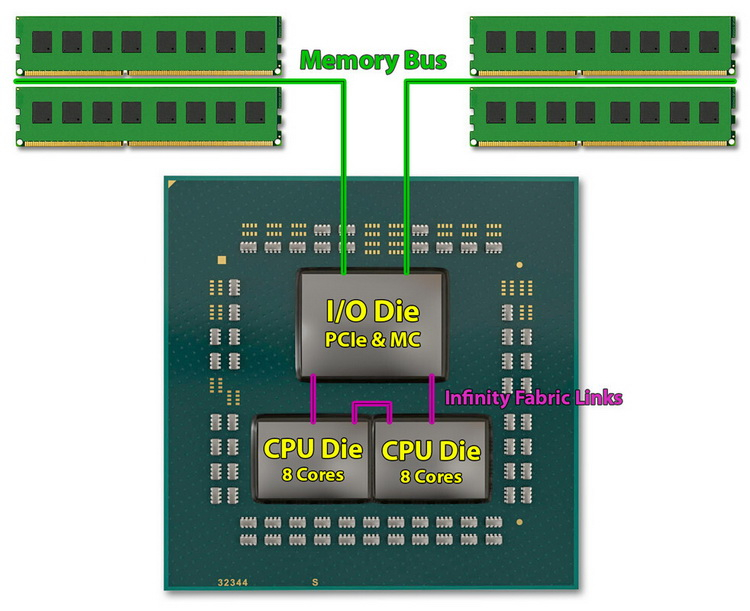 Some AMD Ryzen 5 5600X and Ryzen 7 5800X processors actually have two CCD (Core Complex Die) & ; chipsets containing eight processing cores each. This was found out by well-known programmer-enthusiast Yuri 1usmus Bubliy, who developed the program ClockTuner for Ryzen (CTR) for efficient overclocking of processors of generation Zen 2, and then Zen 3. This finding has been confirmed by the authoritative resource Igor's Lab.

Officially, six-core AMD Ryzen 5 5600X and eight-core Ryzen 7 5800X have one CCD chiplet, while the older members of the Vermeer family (Ryzen 5000) with 12 and 16 cores are based on two chiplets, each containing 6 or 8 physical cores. But as 1usmus, which debugged the CTR 2.0 utility for Zen 3, found out, some of the lower-end Ryzen 5000 processors come with two CCDs, but one of them is somehow blocked.

As Igor's Lab points out, the «special gold versions» of the Ryzen 5 5600X and Ryzen 7 5800X with two chips, which happen to be the ones that reviewers get most often, are actually «degraded» 12-core Ryzen 9 5900X and 16-core Ryzen 9 5950X. Apparently, one of the available CCD chipsets in them has not passed quality control checks at the manufacturing facility and has therefore been deliberately disabled. There is no way to find out exactly which chiplet & ; CCD 0 or CCD 1 & ; is disabled in any particular CPU sample at this time. According to Igor's Lab, however, indirect verification is possible. Chips with an inactive CCD 0 chiplet cause minor interface errors in some utilities for low-level frequency and voltage control of the CCX complexes of Ryzen processors. It is due to such bugs that these «special processors» were discovered by Igor Wallosek, editor-in-chief of Igor's Lab, and enthusiast 1usmus. According to Igor's Lab, in theory it should be possible to enable the deactivated chiplet, which would thereby turn the «happy» 6- and 8-core Ryzen 5 5600X and Ryzen 7 5800X back into the 12- and 16-core Ryzen 9 5900X and Ryzen 9 5950X. However, the feasibility of this conversion is in question, as AMD would be unlikely to reduce the value of the senior processors to the junior models without a good reason. On the other hand, the story of the Athlon II X3 and Phenom II X3 triple-core, which could easily be turned into quad-core by enabling the inactive core via BIOS, is still fresh in the memory.