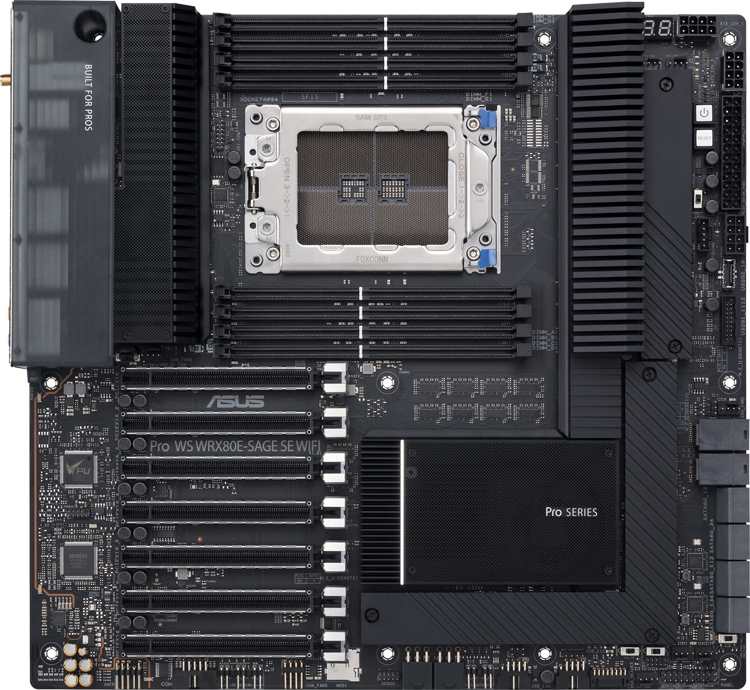 ASUS has announced the Pro WS WRX80E-SAGE SE WIFI motherboard, designed to build high performance workstations. The E-ATX-sized motherboard will support AMD Threadripper Pro (LGA4094) CPUs with up to 64 CPU cores. The TDP value of the chip can reach 280W. The board has eight slots for DDR4-3200 memory modules: up to 1 TB capacity can be used.

The novelty has seven full-size PCIe 4.0 x16 slots into which accelerators for GPU-based high-performance computing can be installed. Two 10 Gigabit Ethernet network ports are available. A Wi-Fi 6 controller is responsible for the wireless connectivity.

Available connectors include USB 3.2 Gen2 ports with up to 10Gbps, as well as USB 3.2 Gen 2x2 Type-C with up to 20Gbps data transfer rate. Sound subsystem is based on Realtek ALC1220 codec.

The ASUS Pro WS WRX80E-SAGE SE WIFI motherboard will be available in March. Price is not announced yet.