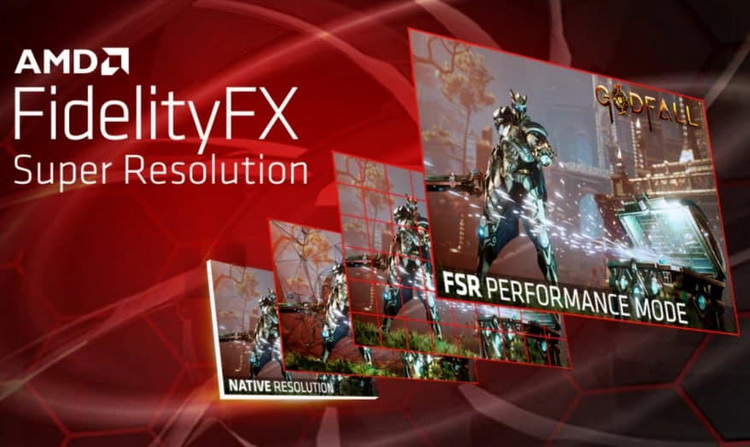 AMD has finally launched its long awaited FidelityFX Super Resolution (FSR) smart scaling technology, which is designed to be the answer to NVIDIA DLSS and improve performance in games;

As of launch, seven games support FSR technology, including Godfall. In the near future, the technology will work with 12 more game titles, including Dota 2 and Far Cry 6. The principle of FSR is as follows: FSR technology lowers the native image resolution on the screen, thus providing a lower load on the GPU and increasing frame rate, and then through the use of special algorithms restores the picture with minimal loss of quality. According to AMD, FSR analyzes the image source, determines the necessary changes and then reconstructs the image in high resolution. The FidelityFX SR algorithm comes into play in the middle operations of the graphics pipeline, following anti-aliasing and tonal compression and before various filters, such as noise or chromatic aberration effects, are applied to the image. FSR scales and sharpens the picture depending on the selected preset in the game settings. According to AMD, the task of integrating FSR technology is up to game developers and already at least 40 leading game studios have expressed great interest in it. The company has also confirmed that the technology will become fully open from mid-July. The company will publish the source code on the GPUOpen website. The manufacturer has provided a table showing the scaling factors for each mode of FSR settings, which remain unchanged for 4K and 1440p resolutions. There are four modes in total. FSR Ultra Quality (maximum quality) displays the picture with a scaling factor of 1.3; Quality mode increases it to 1.5, and Balanced and Performance modes scale the picture with factors of 1.7 and 2.0, respectively. This is slightly different from the values offered by DLSS 2.0 technology from NVIDIA VideoCardz portal has published a comparison table of resolutions and scaling factors which can be found below.

AMD used games such as Terminator: Resistance, Rift Breaker and Godfall to demonstrate the capabilities of FSR technology. The final results depend on the game, the video card model, and the FSR preset used. AMD NAVI 21 (Radeon RX 6900XT and Radeon RX 6800 XT) FSR Performance mode

FSR technology is officially supported by Radeon RX 6000 graphics cards and their predecessors on RDNA architecture, that is Radeon RX 5000 series models (as well as their mobile versions). The manufacturer has not forgotten about the owners of video cards Radeon RX Vega, Radeon RX 500 and RX 400. In addition, AMD's smart scaling technology supports embedded graphics cores of all Zen hybrid processors starting from Ryzen 2000 series and newer. The company has confirmed that FSR works on competitor graphics cards as well. Support is already present in NVIDIA GeForce RTX 30-series (Ampere), GeForce RTX 20-series (Turing), as well as in GeForce GTX 16- and 10-series models. In its announcement, AMD did not say anything about FSR support for Intel graphics cards, as well as game consoles on RDNA 2 architecture (Xbox Series S, Series X and PlayStation 5).