AMD 4700S platform tested: processor from PS5 and 14GHz GDDR6 with consumption higher than Core i7-11700 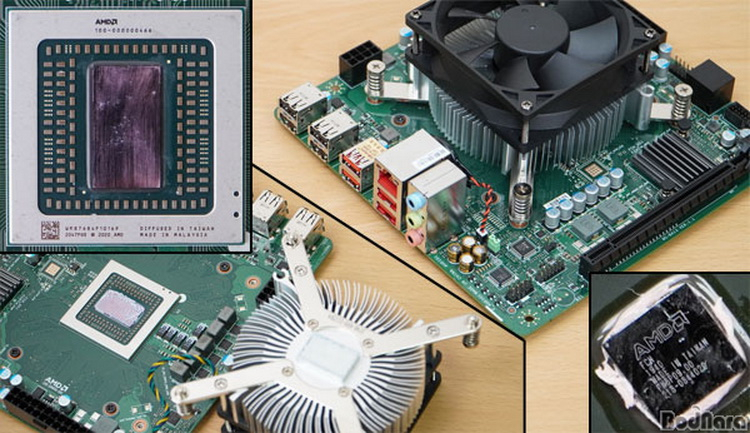 AMD recently unveiled the AMD 4700S desktop platform with an octa-core hybrid processor. Although the manufacturer did not specify it, the underlying APU is supposedly a stripped-down hybrid processor from the latest generation of gaming consoles. Korean portal Bodnara has found out that the APU in AMD 4700S platform is a chip from PlayStation 5 game console.

South Korean resource got access to one of the samples of AMD 4700S platform and conducted a number of tests with it. AMD itself did not name detailed characteristics of the processor in the discussed system. The manufacturer only indicated that it uses an 8-core and 16-threaded chip on the Zen 2 architecture. Bodnara notes that structurally the chip is close to the models Ryzen 7 4700G and Ryzen 7 Pro 4750G generation Renoir with a frequency range of 3.6 to 4.4 GHz. However, the AMD 4700S has a disabled integrated graphics core, which very likely turned out to be defective. At the same time, the processor is incorrectly detected by CPU-Z program - it is indicated that the maximum frequency of the chip is 3.2 GHz.

Bodnara's reviewed instance of the platform had 8 GB of GDDR6 memory with an effective frequency of 14 GHz. The memory chips are soldered directly into the Mini-ITX form factor motherboard from the back.

In the platform, AMD 4700S hybrid chip is paired with AMD A77E Fusion Controller Hub (FCH) chipset. Notably, this chipset was used with the AMD A9-9820 processor, which is codenamed Durango and is at the core of the Xbox One game console. That's why it was initially mistakenly assumed that the AMD 4700S platform was related to the Xbox Series X or Series S. Now it is clear that AMD 4700S is a chip from the PlayStation 5, this conclusion can be made simply by its appearance.

As standard, AMD 4700S based system is equipped with a discrete graphics gas pedal AMD Radeon RX 550. Other video card models are also supported. Their list is available below. However, note that the PCIe x16 slot in the platform has only four PCIe 2.0 lines, so it is impossible to use high-performance GPU here.

The Koreans compared the AMD 4700S platform with an Intel Core i7-11700-based PC with integrated graphics. The AMD system performed quite well against the competitor, but its power consumption level was higher. For AMD platform it is recommended to use power supply with 250W or more.

Obviously, the AMD 4700S advantage in memory handling is due to GDDR6, and in graphics tests - to a discrete graphics card. But in general the AMD platform is designed for home or office use as part of a media center with Internet connection capabilities and is not designed for gamers.