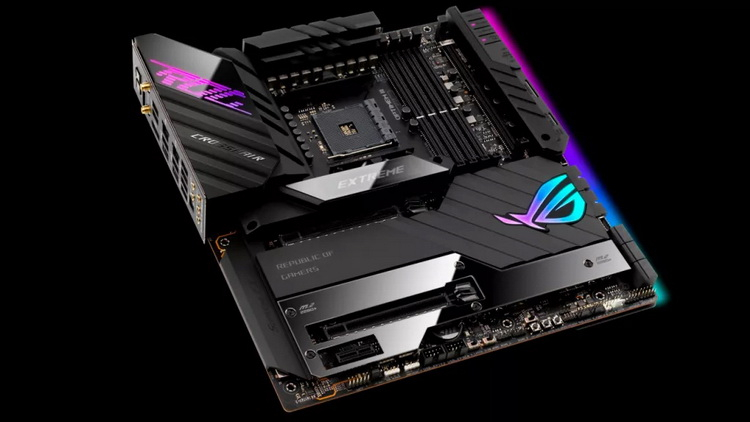 ASUS unveiled new flagship motherboard ROG Crosshair VIII Extreme for AMD Ryzen processors based on AMD X570 passively cooled chipset. New motherboard is intended to build high-performance gaming PC and it fully meets its name & ; it is made in E-ATX form factor and is equipped with a seriously reinforced 20-phase power system, built on the scheme 18+2.

The ROG Crosshair VIII uses 90A power phases and Japanese 10K metal capacitors for quality power. The novelty uses a passive chipset cooling system similar to the previously introduced ROG Crosshair VIII Dark Hero. There are four DDR4 sockets with support for up to 128 GB of RAM.

True, the manufacturer did not specify the maximum frequency of supported RAM. But taking into account the board's rank, we can expect it to support DDR4-5100 standard for Ryzen 5000 series processors. The ROG Crosshair VIII Extreme has six standard SATA III slots and offers up to five M.2 PCIe 4.0 x4 slots. However, to use the full potential of the PCIe 4.0 standard, you must have Ryzen 5000 or Ryzen 3000 series processors. Otherwise, the M.2 connectors will operate in PCIe 3.0 x4 mode. Three of them are mated directly to the CPU itself, the other two, which can be implemented by ASUS ROG DIMM.2 expansion card, are responsible for the AMD chipset.

Also the novelty offers two PCIe 4.0 x16 and one PCIe 3.0 x1 slots. As for networking capabilities, ROG Crosshair VIII Extreme offers support for 10 Gigabit wired connection via Marvell AQtion AQC113CS controller and 2.5 Gigabit LAN via Intel I225-V controller. Moreover, the board supports 2x2 Wi-Fi 6E and Bluetooth 5.2 wireless standards. The manufacturer has not yet indicated all the technical characteristics of the ROG Crosshair VIII Extreme model, so some features of the novelty have to be noted by eye. For example, it can count eight USB Type-A connectors, two Intel Thunderbolt 4 with DisplayPort 1.4 function, as well as two conventional DisplayPort. The sound is made by Realtek ALC4082 controller and ASUS SupremeFX technology. Because the board belongs to the premium segment, the sound codec is amplified by ESS Sabre 9018Q2C DAC/AMP. Other features include a 2-dimensional OLED screen, clip-in NVMe storage mounting mechanism and a bracket for the included graphics card. The manufacturer has not yet announced the price of the ROG Crosshair VIII.