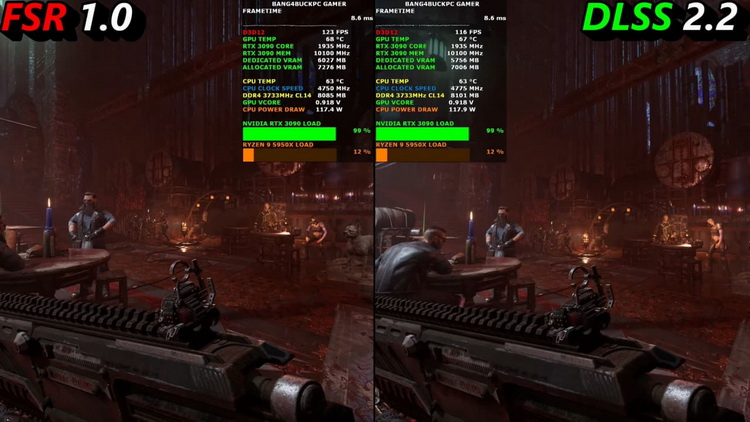 One of the games that added support for AMD FidelityFX Super Resolution (FSR) smart scaling technology was the shooter Necromunda: Hired Gun. Although the game was released very recently, it not only supports FSR, but also NVIDIA DLSS technology, which performs the same function. YouTube channel Back4BuckPC Gamer has tested how both technologies handle scaling to 4K resolution.

It is important to note that NVIDIA DLSS scaled the picture from the original 1440p resolution at the "Quality" setting. AMD FSR technology at "Maximum Quality" settings used the native resolution of 1662p. The image was scaled to 4K resolution at maximum quality settings in the game itself. The higher the quality, the fewer pixels that form the image need to be reconstructed by the smart scaling algorithms. According to Bang4BuckPC, FSR technology compared to DLSS does an excellent job of scaling the picture to almost identical DLSS quality while providing better dynamic performance than the competition.

A completely different picture emerges when comparing the technology in Marvel's Avengers, which also supports both DLSS and FSR. Screenshots of the game in 1080p and 1440p provided by @KanaSaber show that FSR has a problem reconstructing the bridge's battens, while DLSS adds even more clarity than the native 1080p resolution.

Notably, @KanaSaber used the FSR Quality setting for the comparison, not Ultra Quality as in the earlier comparison. The same situation is not in favor of FSR when scaling the picture to 4K resolution using DLSS and FSR in "Quality" mode. FSR scales the picture to 1440p resolution, and compared to native 4K resolution does the job quite well. In this case, however, DLSS does a better job of rendering the heroine's hair - even better than the native resolution.