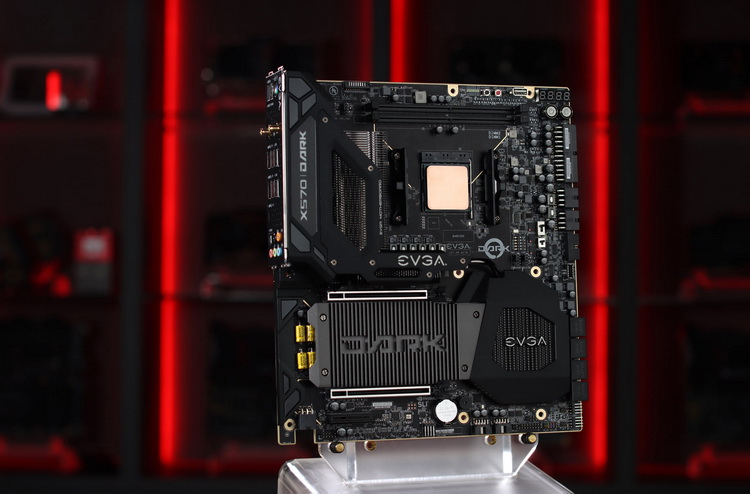 EVGA showed its first motherboard on AMD X570 chipset. New motherboard from the DARK series can hardly be called ordinary, because every detail tells the opposite. Even CPU slot is placed vertically, not horizontally like on almost all other AMD motherboards, and RAM sockets are placed over it. X570 DARK model is made for enthusiasts and is designed for extreme overclocking of Ryzen processors.

The CPU is powered by two 8-pin connectors located next to the 24-pin power connector of the board itself. All of them are mounted on the right side of the board and are horizontally rotated to the plane of the board. This is done to allow easy access to the RAM connectors and for better cable management. EVGA's Marketing Manager Jacob Freeman  confirmed that the board utilizes AMD X570 chipset passive cooling system. The X570 DARK  motherboard uses an impressive 16-phase power supply system cooled by a pair of large aluminum heat sinks connected by copper heat pipe. The heatsinks are covered with the X570 DARK logo with RGB lighting. As mentioned above, the board has two slots for DDR4 RAM. The manufacturer claims to support 5333 MHz+ frequency through manual overclocking. The reason why EVGA installed the slots horizontally is to place them closer to the CPU slot, thus increasing the quality of the transmitted signal and increasing the overclocking potential of the RAM. The maximum supported memory capacity is 64 GB. As for the expansion slots, the company provided two PCIe 4.0 x16 slots, one PCIe 3.0 x4 slot and a pair of M.2 slots under the big radiator with DARK logo. The pictures below show some overclocking results of AMD Ryzen 5000 and Ryzen 5000G processors with this motherboard from EVGA overclocker Vince Lucido alias KINGPIN.

There are eight SATA III and one U.2 slots available as options. There is an extra 6 pins power connector for those who want to take full advantage of the PCIe line. The I/O panel includes 7.1 channel audio outputs, four USB 3.1 Gen2 Type-A connectors, one USB 3.1 Type-C, two USB 3.1 Gen1, a PS/2 combo jack, a couple of Wi-Fi antenna connectors, two 2.5 Gigabit LAN, and one HDMI and DisplayPort connector each. The board also features a POST code indicator, power and reset buttons, as well as a triple BIOS reset button. The manufacturer did not disclose the price of the X570 DARK board, but it is likely that at the start of sales the price of the novelty will be more than $600.