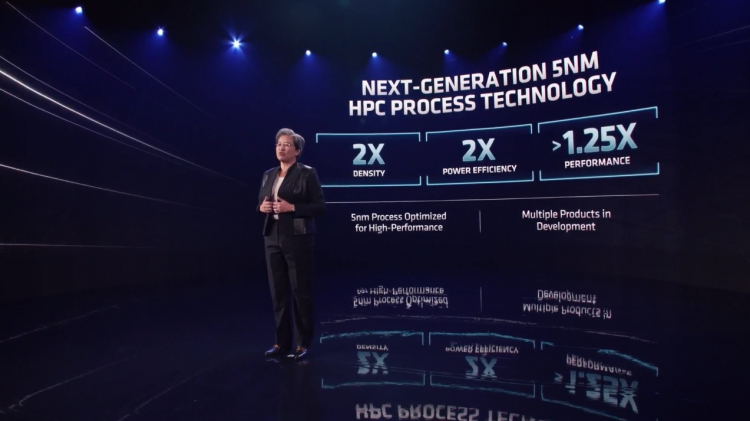 In a presentation today, AMD shared new details about the upcoming generations of EPYC processors on the Zen 4 architecture for data centers. We're talking about EPYC Genoa and Bergamo series;

AMD CEO Lisa Su said the Genoa Series chips will be the world's highest-performing general-purpose computing processors. They will feature up to 96 high-performance Zen 4 cores based on TSMC's optimized 5nm process technology. These chips will offer support for the new DDR5 RAM standard and PCIe 5.0 I/O interface, and will include support for CXL 1.1, providing significant memory expansion capabilities for data center applications. The new 5nm process will offer twice the transistor density and power efficiency compared to the 7nm process used to produce the current EPYC Milan chips. In addition, declared a 1.25 times higher performance compared to 7-nm solutions, which should also please ordinary consumers who are planning to switch to Ryzen processors on the architecture Zen 4. AMD plans to begin production and release EPYC Genoa processors in 2022. Following Genoa, AMD plans to launch a new series of EPYC Bergamo processors specifically designed for cloud applications. These chips will be able to offer up to 128 high-performance cores based on the cloud-optimized Zen 4c architecture. These cores are software compatible with the Zen 4 architecture and are optimized to create configurations with more cores for cloud workloads that benefit from maximum thread density. The Bergamo series processors will come with all the same software and security features as the Genoa and will be processor socket compatible with the previous series chips. According to AMD, the first deliveries of the new EPYC Bergamo processors are scheduled for the first half of 2023.