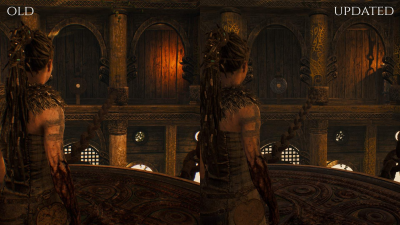 Microsoft and developer studio Ninja Theory have announced the release of a promised patch with technical improvements for the PC version of their adventure action game Hellblade: Senua’s Sacrifice.

Recall that the August update Hellblade: Senua’s Sacrifice for Xbox consoles of the current generation brought with it ray tracing, improved quality of materials, particles and an increased level of detail. These improvements are now available on PC (Steam, GOG, Microsoft Store) along with support for NVIDIA DLSS and AMD FSR intelligent scaling technologies.

The events of Hellblade: Senua’s Sacrifice unfold in the Viking Age. The tormented Celtic warrior Senua travels to the land of the dead to fight for the soul of her dead lover. Hellblade: Senua’s Sacrifice debuted in August 2017 on PC and PlayStation 4, and subsequently made its way to Xbox One, Nintendo Switch, Xbox Series X and S. Since its release, the game's audience has exceeded 6.3 million people.