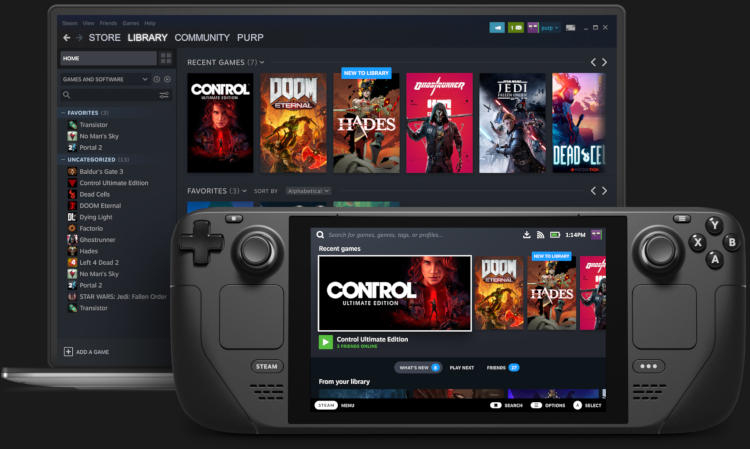 During the Steam Deck Development online event, Valve revealed some details about the work on the portable console, as well as the chip from AMD, which powers the device.

The hybrid chip, codenamed Aerith, was developed by AMD from scratch & ; the goal of the project was to provide stable performance over time. The platform is based on a central 4-core and 8-core Zen 2 processor, clocked between 2.4 and 3.5 GHz. Given the goals of the project, Valve focused on stable clock speeds. The peak FP32 performance of the Zen 2 chip is 448 Gflops & ; this is not the most efficient way to measure the CPU's capabilities, but Valve has not yet provided other data. Aerith is slightly slower than the Ryzen 3 Pro 4450U (473.6 Gflops), which is the closest of the peers on the market. The Aerith has a TDP rating of 4 to 15 watts. There is no hard temperature limit for the chip, so Valve urges game developers to limit the number of frames. This was a conscious decision & ; the company wanted Aerith to deliver the same performance when connected to the network and in standalone mode. Under certain conditions, such as playing in the sun on a hot day, Steam Deck can limit other parameters: device charging speed, loading speed, or SSD bandwidth & ; all for stable graphics performance.

The four cores of the Zen 2 CPU work together with eight RDNA 2 blocks (ranging from 1GHz to 1.6GHz). We are talking about the same RDNA 2 architecture, as in the latest models of AMD Radeon video cards: the same set of features are supported, including FidelityFX Super Resolution (FSR) intelligent scaling. On paper, a single RDNA 2 unit shows FP32-performance of 1.6 Tflops. In practice, at reasonable graphics settings Steam Deck shows up to 60 fps in many modern games. Aerith runs with 16GB of LPDDR5 memory (up to 88Gbps bandwidth) and 1GB of VRAM. This is AMD's first chip capable of LPDDR5. As Valve clarified, modern games work great with 8 to 12 GB of memory, so 16 GB will be enough for the future. Steam Deck was originally expected to debut in December, but a chip shortage forced Valve to postpone the launch to February next year.