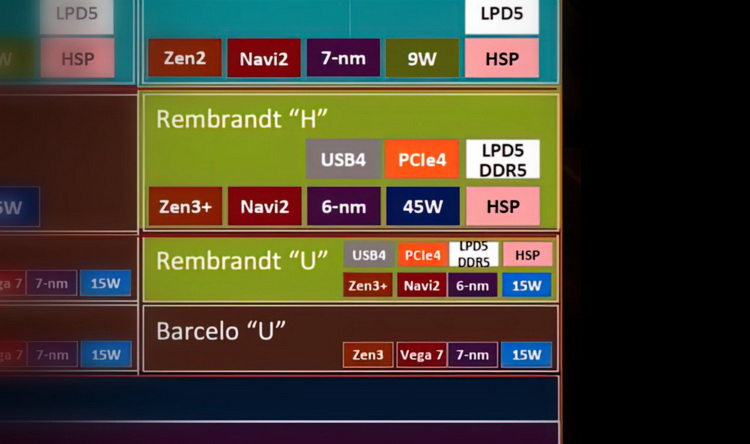 According to Wccftech portal, new flagship mobile AMD Ryzen 9 6900HX processor will be based on 6nm Zen 3+ architecture and will be equipped with integrated RDNA 2 graphics. For the latter the manufacturer is going to use the new marketing name Radeon RX 600M. Directly in the flagship model of the chip will be used graphics core Radeon RX 680M.

At the moment, it is unknown how many Compute Units (CUs) will be present in the «embedded» Radeon RX 680M. However, for the Rembrandt series processors themselves, which will include Ryzen 9 6900HX, rumors attribute the presence of up to 12 CUs. The Ryzen 9 6900HX processor itself is expected to get 8 processing cores with support for 16 virtual threads, 16 Mbytes of L3 cache memory, and 4 Mbytes of L2 cache memory. Since the chip will belong to the HX series, this means that its maximum power consumption (TDP) will be higher than 45W. However, the choice towards one or another TDP value will depend on laptop manufacturers. The processor is also attributed a maximum clock speed of 4.6 GHz. This is similar to the current mobile Ryzen 9 5900HX model. Mobile AMD Ryzen 6000 will get support for DDR5-4800 standard RAM. Nothing is yet known about the support of DDR4 standard RAM. According to VideoCardz, earlier rumors also said that AMD is going to release new desktop hybrid 65W processors with RDNA 2 graphics in the third quarter of next year. We can assume that the integrated graphics of the desktop APU variants will also get new names. The mobile Ryzen 6000 is expected to be announced at CES 2022. AMD has scheduled a press conference for January 4.