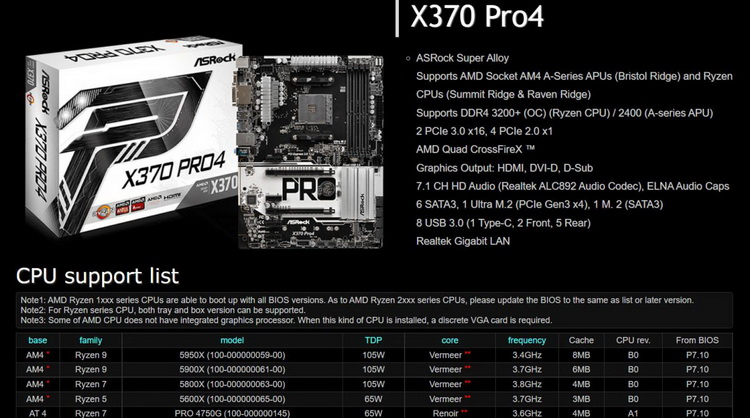 AMD keeps reiterating that adding support for new CPUs to old motherboards & ; is not an easy task. In no small part, the problem is related to the limitations of the BIOS memory where data about support for certain processors is entered. Some issues are also related to the design specifics of older motherboards & ; not all of them have effective enough power supply subsystems (VRM) to provide the declared performance level of all Ryzen 5000 processor models. In addition, older boards do not have support for some technologies, such as PCIe 4.0, which is supported by the newer CPUs. Nevertheless, some unofficial modified BIOS versions for AMD 300-series boards with partial Ryzen 5000 support have appeared earlier on the web. Some manufacturers even claimed to release official BIOS versions for these boards, but then quickly removed their announcements and updates. ASRock has released two versions of BIOS for the X370 Pro4 board, installation of which allows you to eventually use the new AMD processors on it. However, the installation process will require patience. First of all, you need to install BIOS version 7.00. It is a transitional BIOS. The company warns that before installing it on the X370 Pro4 motherboard, make sure that no Bristol Ridge series processor (AMD A-series and Athlon X4 models) is used in the system, as the new firmware has removed support for these chips.

After that, you need to install BIOS version 7.10, which adds support for Renoir and Vermeer processors. The company does not recommend installing this version of BIOS if the PC owner uses Pinnacle Ridge (Ryzen 2000 and Ryzen 2000 Pro models), Raven Ridge (Ryzen 2000G, Athlon 200 and Athlon 200 Pro) and Summit Ridge (Ryzen 1000, Ryzen 1000 Pro) processors with the X370 Pro4 board and does not plan to switch to Ryzen 4000 and Ryzen 5000 processors. New BIOS versions for X370 Pro4 board with support for AMD Renoir and Vermeer processors can be found on the official ASRock website. There you can also check the list of supported CPUs;