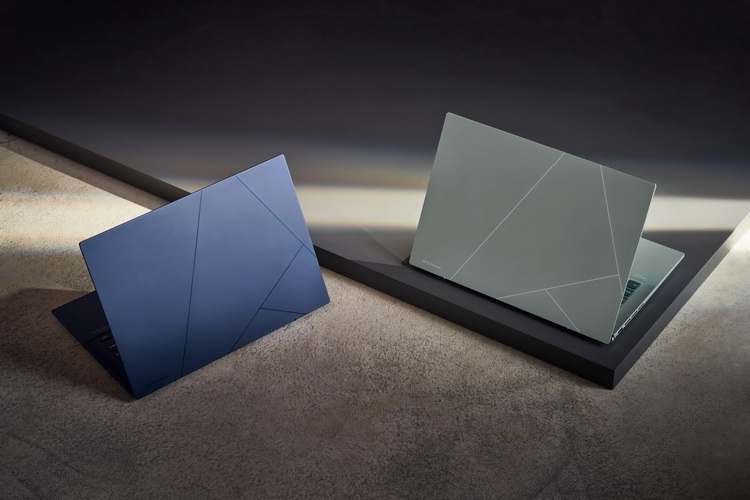 ASUS has expanded its range of ultraportable Zenbook series laptops with three new models: the Zenbook 14 OLED UX3402 and UM3402, as well as a special version of the Zenbook 14X OLED Space Edition. Novelties are equipped with OLED screens, as indicated in the names, and are built on the latest Intel and AMD processors.

The Zenbook 14 OLED (UX3402) features the latest Intel Alder Lake-P processors. A choice of installation is available up to the Core i7-1260P model. The AMD-based variant with model number UM3402 offers the Ryzen 7 5825U processor. The former is claimed to support up to 16GB of LPDDR5-5200 built-in RAM. The AMD version can be equipped with the same amount of memory, but LPDDR4X-4266 standard. A PCIe 4.0 solid-state NVMe drive with up to 1TB capacity is also available.

What makes the special version of the ASUS Zenbook 14X OLED Space Edition stand out is not only the design, but also the equipment. Inspired by the theme of space exploration, ASUS wanted to reflect in this special version of the laptop man's desire for new discoveries. In 1997 it released laptop P6300, which traveled to outer space on board of Russian orbital space station «Mir». It spent over 600 days in orbit and proved to be a very reliable tool for work.

New ASUS Zenbook 14X OLED Space Edition has Morse code encoded message in Latin "Per Aspera Ad Astra»" or "Through Thorns to the Stars". The packaging of the device also has an unusual appearance, and it is suggested not to throw away the box from the laptop accessories, but to use it as a coaster. Completing the design is an unusual color of the device, which the company called Zero-G Titanium.

The laptop has an additional 3.5-inch ZenVision 3.5-inch OLED screen with 256 × 64 resolution and 150 cd/m2 brightness, located on the lid. It can display an image that mimics a spacecraft porthole with a view into outer space. It can also display the time, battery status, various text and the user's name. The basis of the display & ; 14-inch OLED-matrix with an aspect ratio of 16:10, supporting a resolution of 2880 × 1800, refresh rate of 90 Hz, response time of 0.2 ms and a peak brightness of 550 cd/m2. It claims 100% DCI-P3 color space coverage, VESA DisplayHDR 500 True Black compliance and Pantone certification.

The device is based on powerful Intel Alder Lake-H mobile processors. You can choose up to the flagship model Core i9-12900H. Also the novelty can be equipped with up to 32 GB of RAM LPDDR5 and solid-state NVMe-drive up to 1 Tbyte. The notebook has an advanced dual-fan cooling system. There are also two Thunderbolt 4, USB 3.2 Gen2 Type-C, HDMI 2.0 and a 3.5mm combo jack. The system has Harman Kardon speakers and is powered by a 63W·h battery. The Zenbook 14X OLED Space Edition laptop is so rugged that it can go into space. The company points out that it's tested to the strictest protocols to meet U.S. Space Systems Command SMC-S-016A standards and can operate in temperatures from -24° to 61° C and withstand vibration from 20 to 2,000 Hz.