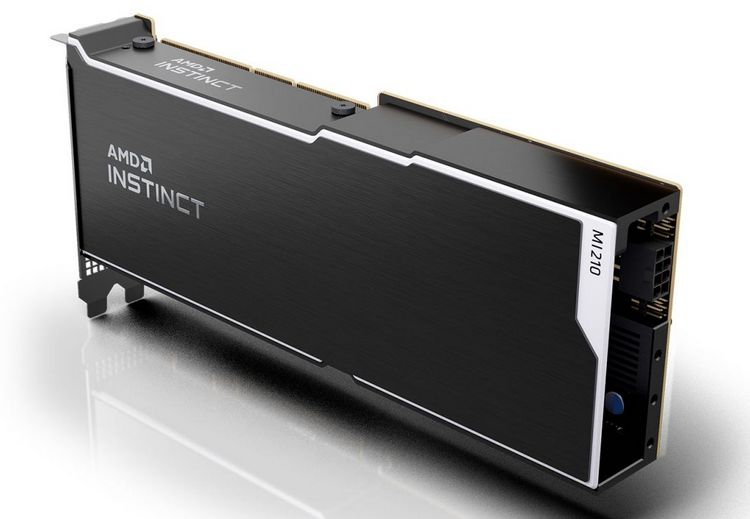 AMD has unveiled the Instinct MI210 gas pedal designed for high-performance computing applications. The new product features a single GPU, which is primarily different from the flagship Instinct MI250 and MI250X introduced earlier.

The Instinct MI210 is based on a graphics processor with CDNA 2 architecture, which, unlike the gaming RDNA 2 in Radeon graphics cards, is aimed specifically at computing. Used chip with 104 processing units, which have 6656 stream processors. On a single chip substrate is located 64 GB of HBM2E memory with a 4096-bit interface and support for ECC. The memory bandwidth is equal to 1.6 Tbytes per second. The gas pedal is made as an expansion card with PCIe 4.0 interface. New product is equipped with Infinity Fabric interface for bundling two or four cards in one system. The Instinct MI210 only has one 8-pin connector for extra power so it can only draw 225W. At the same time, the TDP level is 300 watts. The novelty is equipped with a passive radiator, the air through which has to be driven by server fans. As for performance, AMD claims very high performance for the Instinct MI210. In vector FP 32 and FP64 operations, performance reaches 22.6 Tflops, and in matrix FP32 and FP64 & ; 45.3 Tflops. FP16 and bfloat16 operations have a performance level of 181 Tflops, and INT8 & ; 181 Tops. AMD also points out that the MI210 significantly outperforms its direct competitor, the NVIDIA A100 40GB, in high performance computing. AMD said that Instinct MI210 gas pedals will appear in systems from ASUS, Colfax, Dell, Exxact, Gigabyte, HPE, KOI, Lenovo, Nor-Tech Supermicro and Penguin in the coming months. A bit more details about the new product can be found on our sister site ServerNews.