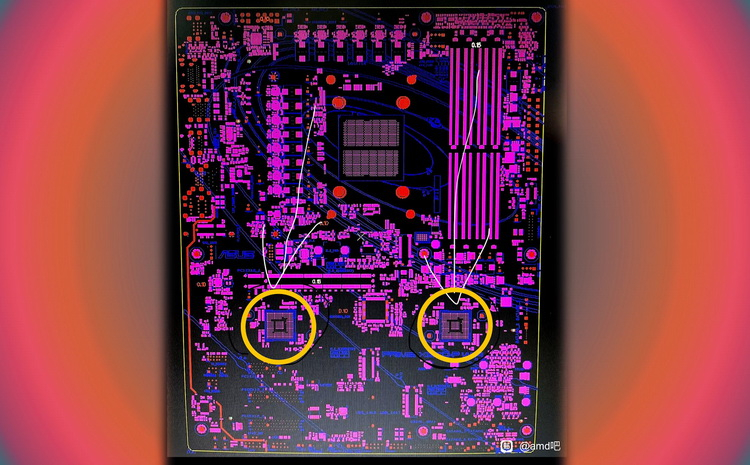 Following the information about ASRock and Gigabyte motherboards for Ryzen 7000 processors, which the manufacturers themselves shared and then deleted, some details about similar boards from ASUS appeared in the web.Someone from the Chinese social network Baidu has published a picture of ASUS X670-P Prime WiFi board with the new processor socket AM5 (LGA 1718).Image source: VideoCardz / BaiduWorse rumors claimed that some older chipsets AMD 600-series, which became known the other day, will actually be a set of two chips.In turn, the younger AMD B650 system logic will be a single chip, sort of half of a pair of chips from the senior segment. Image in higher resolution.Source: VaiduThe published schematic of the ASUS X670-P Prime WiFi motherboard shows the contact pads for the two chipset X670.One of them is in its usual place on the right side of the board, under the RAM sockets, the other is located under the PCIe x16 slot.The presence of two chipset doubles the number of supported PCIe lanes, as well as I/O interfaces.Apparently, AMD decided to take this approach to avoid overheating of one system logic chip.Also, on the image you can see the pin pads for two PCIe x4 and one PCIe x1 slot, 14-phase VRM and four DDR5 slots.Moreover, it offers two M.2 slots for NVMe sticks and six SATA III ports.Picture source: AMDAlso, ASUS is reportedly preparing new ProArt series motherboards for Ryzen 7000 processors: ProArt X670E-Creator WIFI and ProArt B650-Creator.