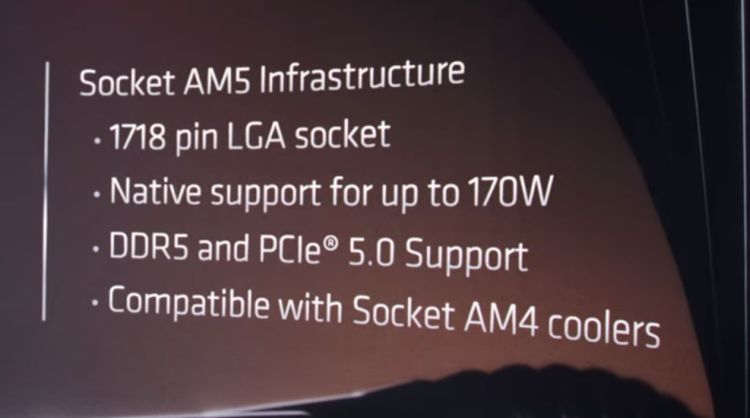 When AMD representatives at the opening of Computex 2022 talked about the capabilities of the new Socket AM5 platform, in the background of the presentation text flashed the reference \"support up to 170W\" and subsequent comments of the company's Technical Marketing Director Robert Hallock (Robert Hallock) misled the audience.It was eventually figured out that this value is the TDP of Ryzen 7000 processors, but not the maximum possible consumption - it is higher.Image source: AMDIrmagicArmagic originally Hallock told PCWorld that the 170W mentioned is the PPT value, which measures the electrical power delivered by the processor's socket.The same parameter can be taken as the maximum heat dissipation.And the TDP value, i.e.the typical power consumption and heat dissipation, according to Hallock's initial statement, is actually less than the 170W.But here AMD representative lied.Image source: AMDSite Tom's Hardware managed to get new explanation from AMD representatives, who finally clarified that for Socket AM5 platform TDP limit is 170 W, and PPT value is obtained by multiplying TDP by 1.35, which finally gives 230 W.This is the electrical power that the Socket AM5 processor is capable of delivering, and this is the maximum heat dissipation that the Ryzen 7000 processors will be capable of.Robert Hallock later had to admit that the TDP is really 170W and the PPT reaches 230W.Note that there was a 170 watt TDP value earlier in the press release text on AMD web site (screenshot above).Image source: AMDSee that Ryzen Socket AM4 processors have TDP value not more than 105 watt and PPT value in this case was 142 watt.In the new platform, the power consumption ceiling has been raised relative to Socket AM4 to ease the performance of senior processors with more cores in situations with high computing load.At the same event AMD said that the Ryzen 7000 series processor engineering sample with 16 cores released in late April could automatically raise the frequency of \"almost all\" cores to values from 5.2 to 5.5 GHz range.In the presentation for the event and on the company's website these frequencies are described more cautiously - \"5 GHz+\".Colleagues from Tom's Hardware website also received clarification from AMD representatives that the particular sample processor from the Computex 2022 event was not operating at the theoretical limits, and its TDP value did not reach 170W.Additionally, it was noted that AMD will keep processors with TDP value not higher than 65 or 105W, and models with TDP value of 170W will be mainly addressed to enthusiasts, expecting to get maximum performance.