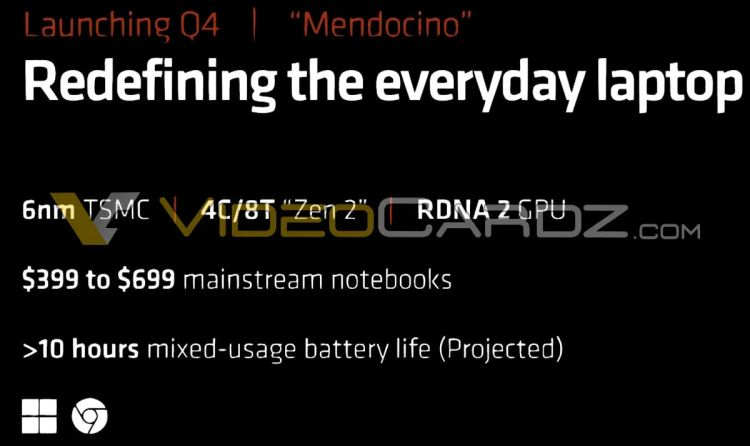 AMD today introduced not only the Ryzen 7000 series desktop processors, but also entry-level notebook solutions.In the fourth quarter, AMD will release 6nm Mendocino mobile processors combining the Zen 2 architecture and integrated RDNA 2 graphics. Image source: AMDIn view of the scale of AMD's assault on its main competitor's position in the processor segment, even such bizarre combinations of innovations should be received favorably by the market.Laptops based on Mendocino processors will be able to get into the $399 to $699 price segment, offering Zen 2 computing architecture, RDNA 2 graphics architecture and a combination of four processing cores with eight threads.The Mendocino processor crystals will be manufactured using TSMC's 6nm technology.AMD now offers Dali and Picasso processors based on the Zen and Zen+ processor architectures and Vega graphics in the entry-level mobile segment.The novelty also offers not the most recent processor architecture (Zen 2 came out in 2019), but still it has a much higher performance.Also to the benefit of performance will be the presence of modern integrated graphics RDNA 2.AMD does not specify exactly how many graphics cores will have new products, hardly 12, as in the Radeon 680M senior chips Ryzen 6000.Note also that the chips Mendocino will offer support for LPDDR5 memory, which has a very high speed, which also will benefit productivity.Notebooks based on Mendocino processors will be able to offer more than ten hours of battery life for mixed use scenarios.Both Microsoft Windows and Google Chrome OS will be offered as the operating system.Characteristically, AMD already offers a combination of Zen 2 computing architecture and 6nm manufacturing technology, as Van Gogh hybrid processors are produced with this recipe and are used in Valve's Steam Deck gaming consoles.