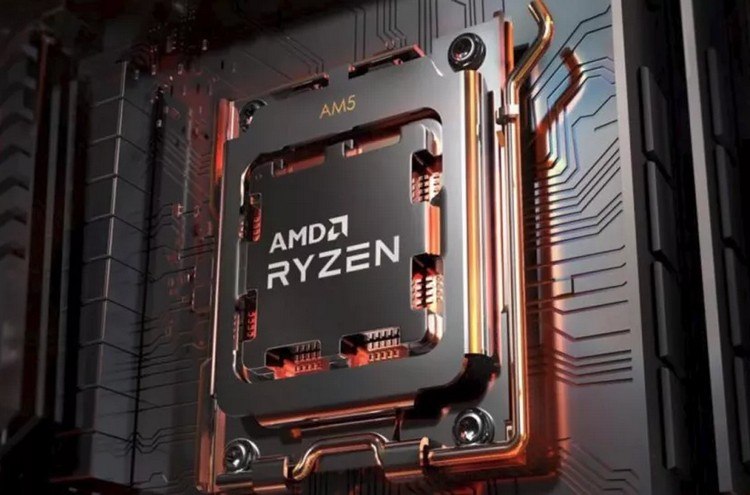 As expected, AMD today unveiled a new generation of processors at Computex 2022 - Ryzen 7000.Featuring integrated RDNA 2 graphics, new design for Socket AM5, new memory and interfaces, these new products are the world's first 5nm desktop CPUs and will offer up to 16 Zen 4 cores, with twice the amount of L2 cache per core compared to their Zen 2 or Zen 3 predecessors - 1MB per core.About the third level cache is not reported, as well as the prospects of the chips on Zen 4 with additional 3D V-Cache.Another important detail of the new chips will be a significant increase in clock speeds.AMD indicates that the frequency in auto overclocking mode (Max Boost) will be higher than 5 GHz.In addition, the presentation showed how a 16-core sample Ryzen 7000-series processor was able to provide in the game Ghostwire: Tokyo above 5.5 GHz, which is very impressive.True, for its cooling, it used a JHL.AMD noted that the new processors will provide a single thread performance gain of more than 15% (compared to the Ryzen 9 5950X in Cinebench R23).The acceleration will provide increased cache, higher frequency and architectural improvements, which should bring an increase in IPC (number of instructions executed per clock).Unfortunately, AMD did not specify what kind of IPC boost the Zen 4 architecture itself will provide.Additional instructions, accelerating processors in artificial intelligence and machine learning systems, are also provided.Ryzen 7000 processors, like their predecessors, consist of three crystals.Two of them are made on 5-nm TSMC process technology and contain processor cores with Zen 4 architecture.The third chip is the chip with IO interfaces, which is in contrast to the similar chip in the CPUs of past generations, is made by 6nm process technology instead of 12nm.But a much more important difference between the new crystal IO is that it has a built-in graphics processor.So every AMD Ryzen 7000 desktop processor will be able to offer at least basic integrated graphics.Previously, the usual Ryzen desktop did not have \"embedded\", and only Ryzen G-series chips had them.Another important feature of the new IO chip is support for new standards.We are talking about support for DDR5 memory, as well as PCI Express 5.0 bus.Thus, AMD has caught up with Intel in terms of support for modern technologies in CPUs - the \"blues\" have the specified memory and bus support Alder Lake-S, introduced at the end of 2021. The new chips are created for the new socket AM5 and this is the first socket change for Ryzen processors - all previous generations, from Ryzen 1000 to Ryzen 5000, used Socket AM4.New socket, among other things, is just needed to support DDR5 and PCIe 5.0.It should be noted that with the new CPU socket AMD finally moved away from unloved by many people connection of PGA type with stems on CPU, and changed over to LGA design - stems are in the socket itself, and on CPU only pads, as Intel has for many years.Chips with TDP up to 170W are supported, and compatibility with Socket AM4 coolers is retained.AMD has not yet introduced individual models of Ryzen 7000 processors, as well as did not specify a release date.It was noted only that the new generation Ryzen will debut this coming fall.