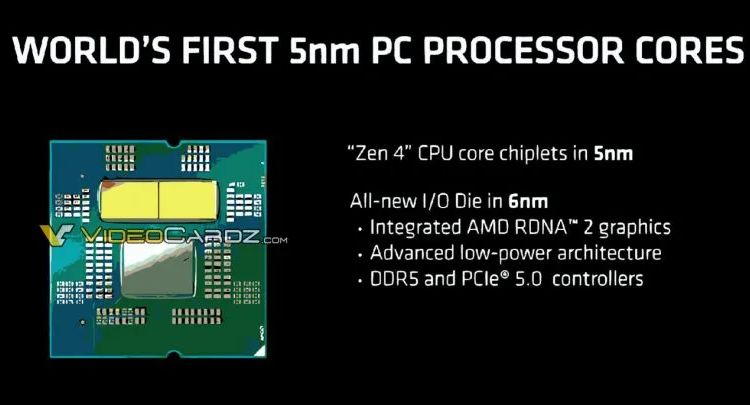 Official details about AMD's Raphael family processors will no doubt be presented by company head Lisa Su at the opening of Computex 2022 today, but so far leaks from the official presentation suggest that they will outperform their predecessors by 15% or more in single threaded applications.Source image: VideoCardzThe Ryzen 7000 family will offer a combination of Zen 4 architecture, DDR5 memory support and PCI Express 5.0 bus.To work with new processors will require motherboard socket AM5 (LGA 1718), but the former cooling system for Socket AM4 will remain compatible with them.The TDP limit for the platform as a whole will be increased to 170 W, but it is not yet possible to say that such limit will be achieved within the Ryzen 7000 family.The processors with the Zen 4 architecture will receive a doubled to 1 MB of cache memory per core, and the maximum frequency in auto-tuning mode will exceed 5 GHz.In single threaded applications the performance gain will be more than 15%, although this statement still needs to be explained in more detail by the authors of the presentation.Finally, along with the architecture Zen 4 will be implemented additional instructions for working with artificial intelligence.Under the cover of the heat spreader, which will get a new shaped form due to the need to envelope located on the PCB microelectronic elements, will be located three crystals.Two of them will be manufactured at 5nm by TSMC and will carry processing cores, while the third will integrate memory controllers and PCI Express 5.0 bus, a power management subsystem, as well as integrated graphics of RDNA 2 generation.This chip will be produced by 6-nm technology, which in general should give the processors optimal thermal performance and power consumption.The announcement of Ryzen 7000 processors is scheduled for this fall, and so far we can only dream of more specifics.