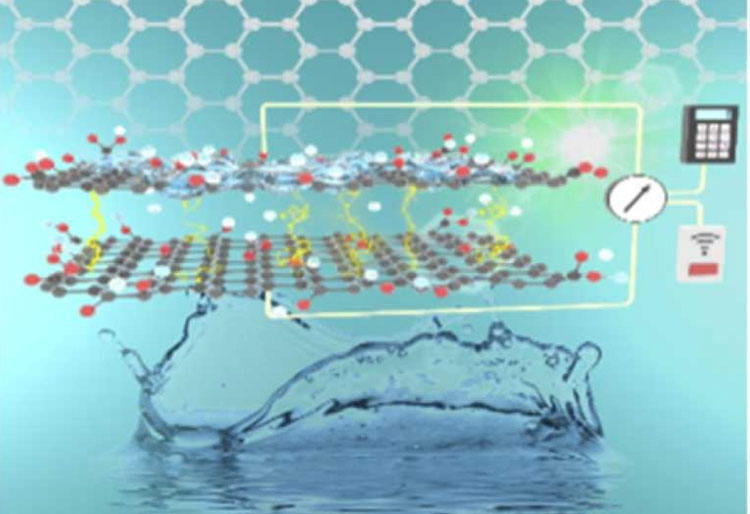 Scientists believe that half of the sun's energy hitting the Earth is spent on evaporating water from its surface.The Australian company Strategic Elements has set a goal to harness at least some of this energy into electricity.In collaboration with local scientists, the company has developed a battery that charges itself exclusively through moisture differences at its electrodes: the higher the humidity, the faster the charge.Image source: University of New South WalesIn a statement on their website, Strategic Elements suppressed details about the technology behind the \"energy ink\" (Energy Ink).However, the information about the scientific partners from the University of New South Wales (UNSW) and the State Association of Scientific and Applied Research (CSIRO) makes it clear what kind of development we can talk about.A couple of scientists from UNSW and CSIRO published an article about the battery that runs on a gradient (difference) of humidity in the Nano Energy magazine.The development is based on graphene oxide, which Energy Ink also talks about.The graphene oxide in the accumulator plays the role of a carrier of ions and a medium for their appearance in the process of absorbing moisture from the air.The electrodes are a layer of fluorine-doped tin oxide (FTO) and silver.Image source: University of New South WalesIn the dry \"functional layer\" of graphene oxide, protons are immobilized (fixed) and stationary.When there is a difference in humidity, one side begins to absorb water molecules from the air, in the process ionizing them, which also causes the formation of carboxylic acid (COOH) and positively charged hydrogen ions (hydrides).There are more hydrides on the wet side and the ions migrate towards the dry side of the graphene oxide layer, which leads to the creation of a potential difference or voltage at the electrodes.As the hydrides dry out, they return to their original state.The formation of moisture triggers the process again, and the device is charged again and ready to work.The developers assure that the prototype battery will be presented in the third quarter of this year.During the experiments, the battery was able to generate a voltage of 0.85 V and a current of 92.8 mA per square centimeter of the surface.To be clear, the battery is made of flexible materials and promises to be the first to hit the market for electronic medical patches.Theoretically, it is even now capable of powering the vast majority of wearable electronics just by running on human skin with sweat.Image source: University of New South WalesThe production of a one amp-hour flexible self-recharging battery from moisture in the air requires a 36 cm2 cell.To demonstrate the concept, the company will manufacture a 100 cm2 cell and has the potential to manufacture a 3 cm2 cell.We are waiting for interesting results.