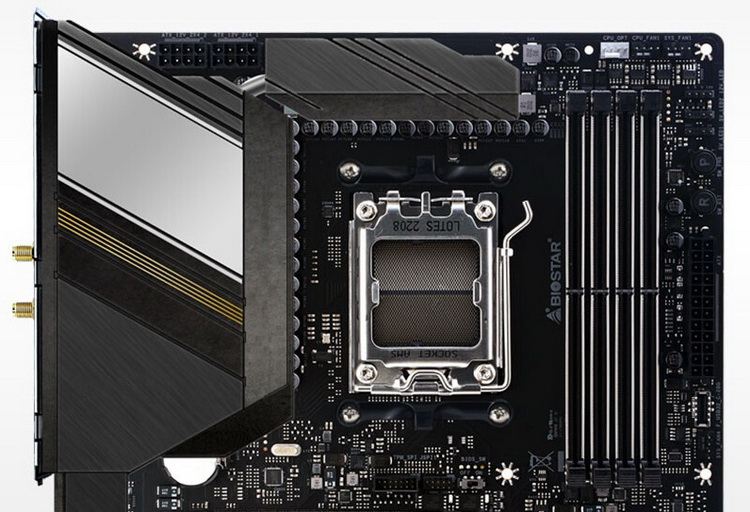 Biostar has shown the X670E Valkyrie motherboard at Computex 2022 based on the flagship AMD X670E chipset.New motherboard is designed for upcoming Ryzen 7000 (Raphael) processors.Image source: BiostarThe manufacturer has not yet disclosed all the technical specifications of the X670E Valkyrie board.The novelty is equipped with two slots PCIe 5.0 x16.However, when you install two graphics cards the number of dedicated PCIe lines are divided in half between them, both slots will operate in x8 mode.There is also a third slot PCIe 4.0 x16.The novelty received four M.2 slots for SSDs, but how many of them support PCIe 5.0 is not specified.At least the uppermost one must comply with the new standard.There is also one M.2 Key-E slot for Wi-Fi/Bluetooth module. It is also supposed to have 2.5 Gbps network adapter, HDMI and DisplayPort connectors, six SATA III ports, two USB Type-C Gen 3.2 2x2 (one front, one rear), as well as Realtek audio codec and a couple of connectors for ARGB-lighting.Interestingly enough Biostar is the only motherboard manufacturer who announced at Computex 2022 which announced what frequency of data transfer speeds its product would support.The X670E Valkyrie model allows you to install four DDR5-5600 RAM modules.However, it should be remembered that AMD AM5 platform can support even higher speed RAM modules.For example, AMD held its presentation using DDR5-6000 and even DDR5-6400 memory. Image source: AMD