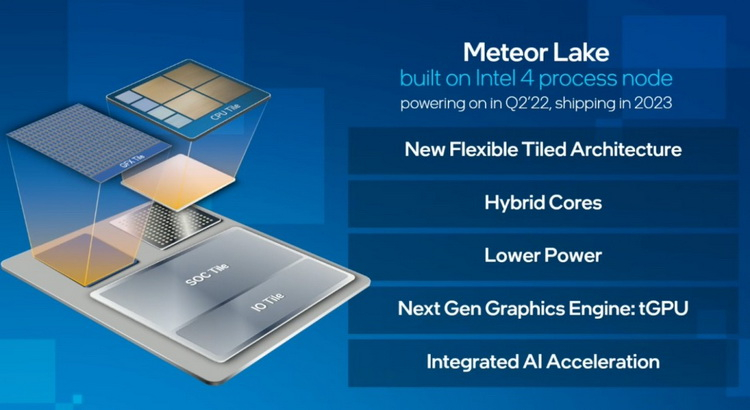 Intel has shown two versions of its 14th generation Core mobile processors, codenamed Meteor Lake, at its Vision 2022 event.The chips are due to replace Raptor Lake processors next year, due for release in late 2022.Image source: Intel Meteor Lake moves away from the traditional single-chip design and will use multiple chips or tiles on a single wafer using its second-generation Foveros packaging technology.This technology was first used in the energy-efficient Lakefield series mobile processors, and is also used in Sapphire Rapids server processors and Ponte Vecchio series GPUs.At the Vision 2022 event, the company showed a standard Meteor Lake mobile processor packaging option, as well as its significantly more compact version.Each type will serve its own purpose.The first will be used in regular and gaming laptops, or in mini-PCs.The second will probably be used in ultra-thin laptops. Meteor Lake processors will include an Intel 4 (7nm) process chip with processing units, an embedded GPU chip based on TSMC's 3nm process (N3), and an interface chip (SoC-LP) based on TSMC N4 or N5 processors (various versions of 5nm process).The chips will use Redwood Cove's large computing P-core and Crestmont's small, energy-efficient E-core, and will get up to 192 executive graphics units with Intel's Xe architecture. The use of \"tiles\" provides more flexibility when it comes to choosing processor configurations.In theory, it will make it easier to increase the number of cores in the chip or opt for a more efficient integrated graphics core - it will simply require replacing the \"tile\" with a more efficient option when building the chip. Intel has also confirmed that Meteor Lake will scale to a 125W TDP rating.In other words, there will be desktop models in the series as well.However, the company has not shown them yet.According to Intel, the 14th generation of Core processors will be released in 2023.Very likely, in its second half, as the release of Raptor Lake is expected only by the end of this year.