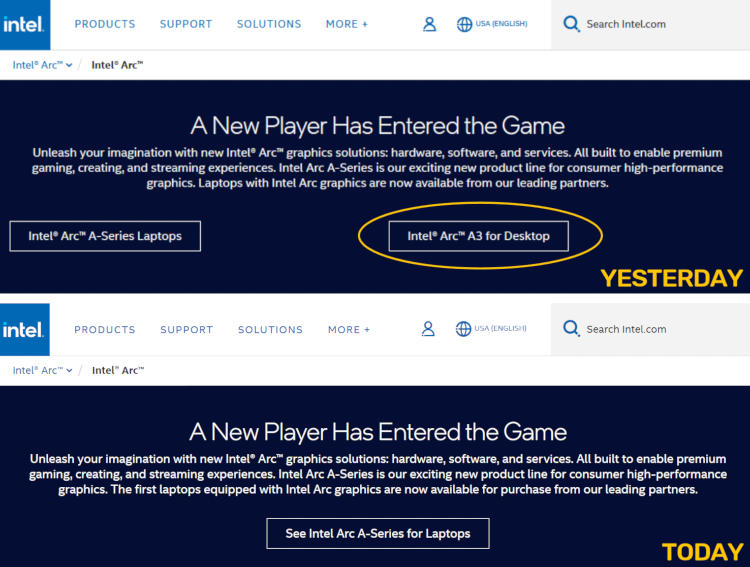 The release of the Intel Arc discrete desktop graphics cards has already been delayed quite a bit, but Intel is giving more and more signals that it will happen in the foreseeable future.Previously, the manufacturer promised to release the graphics cards in Q2, which is a little over a month away.It looks like it will be - a mention of desktop video adapters flashed the day before on Intel's website.Screenshots from intel.com yesterday (top) and today (bottom).Image source: videocardz.comYesterday, according to VideoCardz, a link to the Arc A3 series desktop graphics card page briefly appeared on Intel's website.The link led nowhere, and by now it has been removed altogether, but the very fact of its appearance indicates that the new discrete graphics will indeed soon go on sale.Earlier Intel said that the first Arc cards will be exclusive to Chinese computer makers.The Arc A3 will debut as part of off-the-shelf PCs, and some time later the graphics cards will hit the market as standalone products.Until the end of the summer is expected to release a more productive line of Arc A5 and A7, but the first to debut it is the budget model based on the graphics processor ACM-G11.At the moment, we know that the range of A3 includes only two positions: A380 and A310, and, if we believe the rumors, you should expect the first A380.The graphics card will get a full graphics processor ACM-G11 with eight Xe-core (1-24 shader) and 6 GB of memory GDDR6 with 96-bit bus.