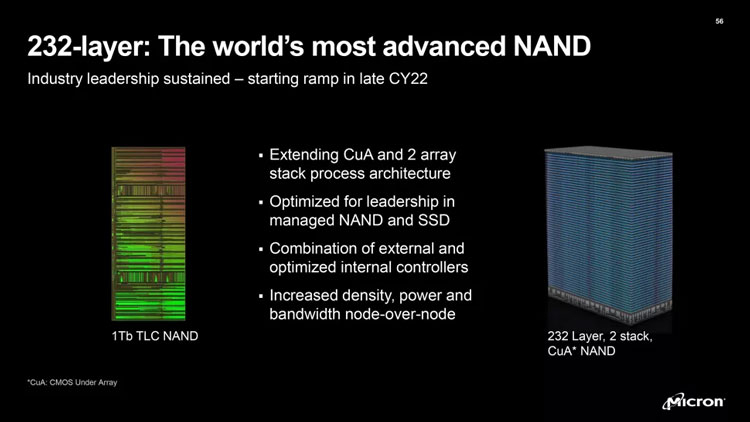 American company Micron announced the development of the industry's first 3D NAND flash memory chips, consisting of 232 layers.Mass production of the novelty based on TLC cells will start at the end of 2022.The first products based on the new memory will be available in 2023.The increased write density promises lower power consumption, higher speeds, and lower costs, which will be converted into either Micron's profit or lower prices for SSDs.Image source: MicronIn order to achieve the record number of layers, Micron used a previously proven method - it placed one 3D NAND chip on top of another, electrically connecting them and placing them on a common substrate (substrate and controller).In the process of splicing the crystals some of the layers were inevitably lost, so from the two 128-layer crystals came not 256-layer 3D NAND chip, but 232-layer, which is also good.It should also be noted that Samsung presented a 256-layer 3D NAND back in 2020, but mass production of such chips has not started.Therefore, the previous record-holder can be considered a 176-layer flash memory chips, the production of which both Micron and Samsung began in the second half of 2021.Also recall the Chinese company YMTC, which is about to appear in the arsenal of 192-layer 3D NAND.Another advantage of new products Micron can be considered as moving the control electronics under the chip with an array of cells.This is a CMOS under array (CuA) technology, which all 3D NAND manufacturers have to a greater or lesser extent today.Micron does not disclose detailed specifications for 232-layer chips.It is known that the capacity of chips is 1 Tbit (128 GB) and in general they have become faster, which promises the emergence of even more efficient SSDs.