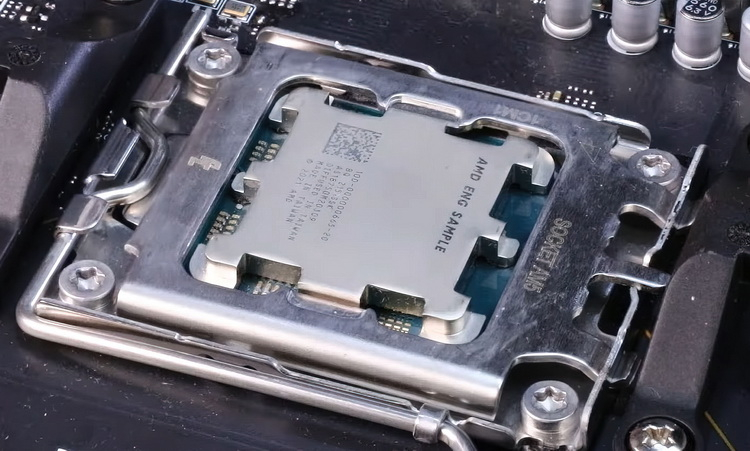 MSI has published a video that explains how to install Ryzen 7000 series processors on a motherboard with Socket AM5 socket.The video features an engineering sample of the next-generation 16-core flagship chip.Such a chip, according to VideoCardz, has already been seen in the distributed computing network MilkyWay@Home in January this year.Image source: MSI The Ryzen 7000 engineering sample shown in the MSI video is labeled 100-000000665.The existence of the same sample became known earlier this year.At that time, the following next-generation AMD desktop processor engineering samples were found in the MilkyWay@Home distributed computing network database:AMD Eng Sample: 100-000000665-21_N [Family 25 Model 96 Stepping 0] - 16 cores / 32 threads;AMD Eng Sample: 100-000000666-21_N [Family 25 Model 96 Stepping 0] - 8 cores / 16 threads.Both were entered into the database between December 21-24, 2021.In other words, these are very early engineering samples. Image source: MilkyWay@HomeThe MSI video shows that the 665 sample was actually manufactured back in 2021.Image source: MSIAs for MSI's instructions on installing the Ryzen 7000 processor into the Socket AM5, the process is nothing short of easy and not much different than installing Intel processors.Although the instruction may be useful for AMD chips fans that have never encountered processors in LGA socket, AMD added special notches on chip's textolite that indicate exactly which side you need to put the processor in the socket for the ease of installation.The AM5 CPU socket itself has special protrusions that correspond to the cutouts on the chip.A video on Ryzen 7000 installation is available below.It is worth noting that you need to install chips into LGA sockets with great care.But to fix accidentally bent legs on the processor, as it was with former Ryzen and not only, is much easier than in the LGA socket.