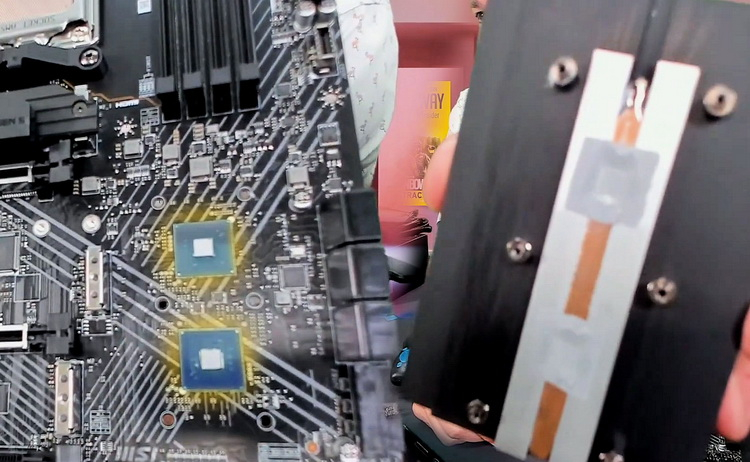 MSI in its online broadcast MSI Insider showed the AMD X670 chipset live on one of its motherboards without a cooler installed for the first time.It really consists of two chipsets.Earlier on AMD itself confirmed that its high-end chipset is a bundle of two AMD B650 chips, but the company did not show them live.Image source: MSII earlier confirmed that Ryzen 7000 systems will receive AMD EXPO technology to overclock DDR5 RAM, and also published a video instruction to install Ryzen 7000 in the new socket AM5.AMD itself doesn't seem to like that its partner is so straightforward in disclosing this information.Apparently, at Computex 2022 AMD only wanted to share some fresh details about its next-generation desktop processors, as well as the platform in which they will be used.No full-fledged announcement, at least now, was out of the question.It is expected this fall. After all, under AMD pressure MSI had to remove some previously published information.However, the manufacturer did not give up any fresh leaks, and the last one was live, where MSI was showing different products which are about to be released. The new AMD platform uses Socket AM5 (LGA 1718) processor socket and will support chips with a peak power consumption of 170W.First generation of Socket AM5 processors will be based on Zen 4 architecture, and will have support for DDR5 memory and PCIe 5.0 interface.Motherboards for new processors will be equipped with AMD X670E, X670 and B650 chipsets.The first and second are logical sets, consisting of two B650 chipsets.They will support up to 24 lanes of PCIe 5.0 for graphics and memory subsystems.X670E and X670 chipsets have 7 W heat pack per chip, and X670 boards with two chips moved away from each other are quite able to get by with passive cooling, which would be hard to achieve if all these chipsets possibilities were realized in one chip.