Rumor: Ryzen 7000 will get performance gains of 7 to 10% per clock and can automatically overclock to 5.85 GHz 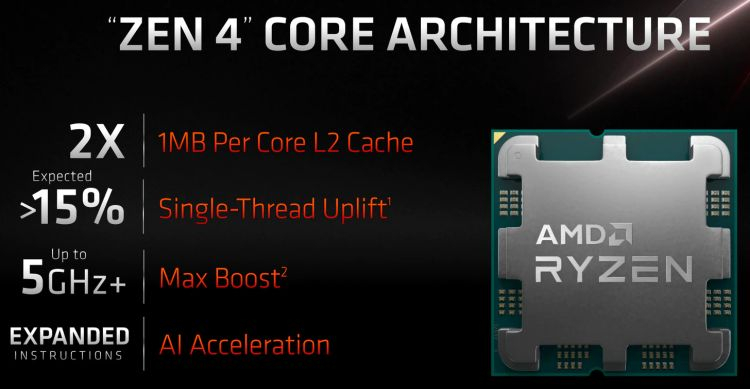 AMD plans to release Ryzen 7000 processors with Zen 4 architecture only this fall, so at the May event limited itself to mentioning only general characteristics of the new family.Performance gains in single-threaded applications of more than 15% and the ability to automatically raise the frequency beyond the 5 GHz limit hit the AMD presentation, but these are very conservative estimates, as knowledgeable sources convince.Image source: AMDThe young and ambitious website Angstronomics continues to gain the trust of the audience through important news about AMD products.According to the source, the internal goal for the company is to increase performance per clock-cycle in single-threaded loads by 7% when moving from Zen 3 to Zen 4, and in multi-threaded loads the increase can reach all of 10%.Taking into account that clock speeds will also increase, the actual performance gain will be higher than these limits.Besides, when actively working with RAM, DDR5, which support for AMD debuted under Zen 4 architecture, will have an advantage.In the description of Ryzen 7000 processors' frequency response the primary source reminds about the ability to run up to 5.55 GHz including unattended liquid cooling system, but without manual overclocking.Adding to the intrigue is a statement from the Angstronomics site about the existence of a Raphael model with a maximum frequency of 5.85GHz, which is achieved by one or more cores as a result of automatic overclocking.The source also explains the reasons why AMD has no plans to release Raphael models with more than sixteen cores.Initially, Socket AM5 platform was designed with Socket AM4 cooling system compatibility with the new CPU socket in mind.For this reason, the latter had to keep the same geometric dimensions, and the transition to the LGA design forced the company to move the front side of the substrate condensers.In turn, this required the use of an unusually shaped heat spreader cover with rectangular cutouts for \"islands\" with capacitors.All this severely limited the possibility to place additional crystals on the substrate for Socket AM5 CPUs, therefore, computing cores are distributed only in two crystals, eight pieces each.Increasing the number of cores within the existing 5-nm process technology, taking into account the increase in the second level cache capacity, is not possible.