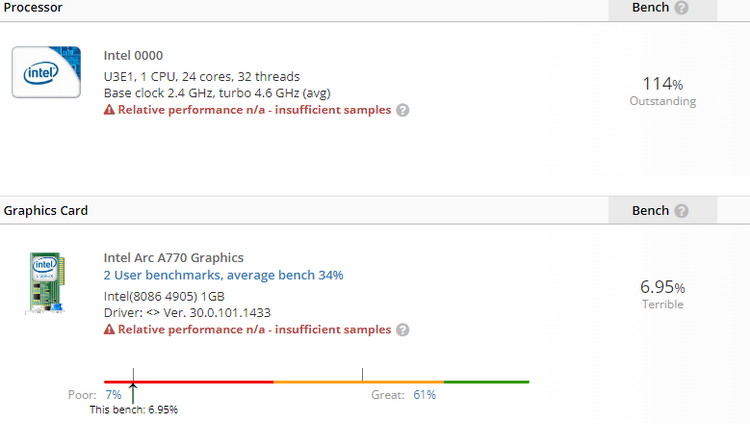 The UserBenchmark website database noted the Intel Raptor Lake 24-core processor in company with the Intel Arc A770 discrete graphics gas pedal.It looks like both upcoming PC components are now going through an active testing phase.Image source: IntelIt's interesting that the test system used 32GB of DDR5-4800 standard RAM.According to recent rumors, Raptor Lake processors will be able to work with faster DDR5-5200 memory modules without additional overclocking.Raptor Lake engineering sample itself has on board eight performance and 16 energy efficient cores.The maximum frequency of the processor in the test was 4.6 GHz, which is again below expectations, but not bad for a test chip.It is assumed that the new Core 13th generation chips will be able to automatically overclock up to 5.5 GHz on multiple cores.Image source: UserBenchmarkThe very low graphics performance of the discrete Intel Arc A770 gas pedal is explained by the fact that the video card used only 1 GB of memory.Recall that the discrete desktop graphics cards Arc Alchemist company Intel has promised to release this summer.In turn, Raptor Lake processors are expected to launch in Autumn.They will be direct competitors to AMD Ryzen 7000 chips.