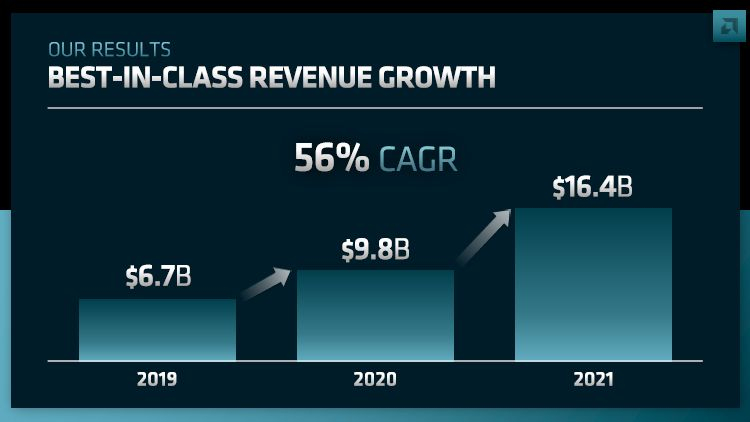 AMD event for financial analysts had as its main goal not only to tell about new products and plans, but also to mark financial targets in the long-term development model.This mission was predictably assumed by the CFO Devinder Kumar, from which it became clear that in the future AMD's revenue will be more dependent on the server segment.Image source: AMD Until now, the company has summarized the revenue generated from sales of server and embedded solutions, which now include components for gaming consoles.If at the end of 2021, revenue in this area reached $ 8 billion, amounting to about 40% of the total, in the long term AMD expects to increase this share to values over 50%.At the same time, the development model includes an average annual growth of total revenues of 20 %.If you consider that the PC market will not be able to increase the revenue at such a rate even with the prospect of strengthening the position, the main engine of growth will be the market of server and embedded solutions.Image source: AMDIn fact, if we consider the period from 2019 to 2021 inclusive, the AMD revenue in the segment of server and embedded solutions during this time increased from $ 1 billion to $4 billion, and its share in total cash income increased from 15% to 25%.Since the second quarter of this year, AMD will introduce a new structure for financial reporting, which will combine the segment of game consoles and consumer graphics cards, and embedded solutions will be separated from the server.The fourth area of focus will be the client segment, where revenue from sales of CPUs only will be accounted for.Computing gas pedals based on graphics processors (CDNA) will be attributed to the server segment.Image source: AMDThe profit margin of AMD long-term financial model reaches 57%, while the last fiscal year it ended with the figure of 48%.Progress in this direction will be achieved both by increasing the share of more expensive products, as well as by optimizing the cost of production.Operating expenses will be kept within the range of 23 to 24%.Operating profit margin will approach 35%, whereas last year it did not exceed 25%.Profitability in terms of free cash flow is planned to increase from the current 20% to 25% or more.We should add that last year the company ended with a free cash flow of $ 3.2 billion, which allowed it not only to plan the purchase of strategically important assets, but also to think about returning capital to investors through dividends and buyback of their own shares.Image source: AMDThe acquisition of Xilinx, AMD predicts, will increase revenue from sales of server and embedded solutions from $4 billion to $ 8 billion, which in percentage terms equals progress from 25% to 40% of total revenues.AMD is also making optimistic projections for the current fiscal year.It is expected that the revenue will increase by 60% to $26.3 billion, the rate of return will reach 54%, and operating costs will be able to keep at 24% of revenue.Image source: AMDThe market capacity of the long-term forecast AMD sorts by target segments.Altogether its products will be offered in markets with a combined turnover of $300 billion, of which the PC segment will account for only $50 billion, the gaming segment claims $37 billion, a solid $125 billion will go to the data center components market, embedded solutions will get $33 billion, the automotive sector will compete with them with $27 billion, and telecommunications solutions with $32 billion will not be left out.At least the absorption of Xilinx will allow AMD to expand coverage of market niches, opening up the market with an annual turnover of at least $10 billion in the aggregate.Image source: AMDIn fact, in the long-term financial model of AMD included intentions to increase return to shareholders.This means that you can count on not only a regular redemption of shares from the market, but also good dividends.For this purpose, the company is going to spend more than 40% of the annual free cash flow.Further purchases of strategically important assets and technologies are not ruled out.Will expand the staff involved in development and research.CFO of the company explained what factors will contribute to the growth of AMD's profit margins in the long term.First, the takeover of Xilinx alone will already raise the figure from last year's 48% to 52%.Secondly, the server, gaming and PC market segments, as well as new types of products for server systems, including embedded systems, will be responsible for profit margin growth in the future.Finally, optimizing the product range and reducing the cost of production will ensure the remaining increase in profit margins.