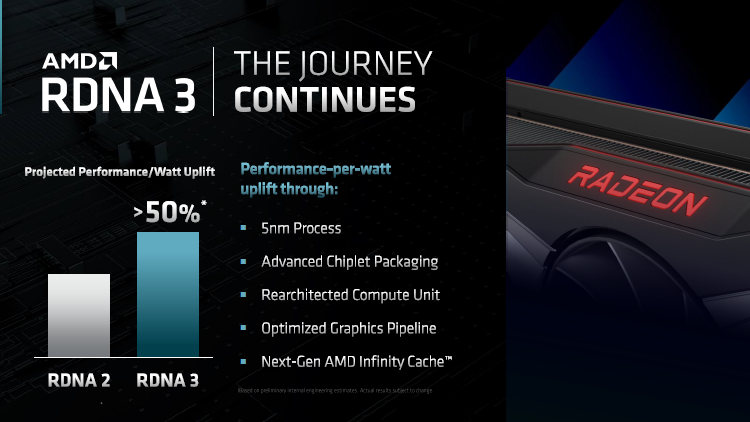 For a long time AMD presentation makers hesitated to admit what exact process technology will be used to make RDNA 3 graphics processors, scheduled to debut before the end of this year.Now the time has come to partially reveal the cards: it will be a 5nm technology combined with a chip layout.Image source: AMDThe relevant revelations were made at AMD's event for financial analysts, which ended this business week with a flood of noteworthy news items for the general public.As the target audience of this information was mainly investors, AMD also considered the near evolutionary perspective: GPUs with RDNA 4 architecture, belonging to Navi 4x family, are supposed to debut by the end of 2024.They will be released with more advanced technology compared to 5-nm, but whether it will be a 3-nm processor, is not specified openly.Image source: AMDNo less important is the fact that graphics solutions with RDNA 3 architecture will be released by the end of this year.How wide their range will be in 2022, it is difficult to judge, about this will probably be made relevant statements closer to the time of the announcement.AMD promises that the Navi 3x family will provide \"industry's best performance per watt\", will use advanced packaging technologies and support advanced multimedia features.The latter includes support for DisplayPort 2.0.Picture source: AMDA separate slide in the presentation was dedicated to a 50% increase in performance per watt power consumption over RDNA 2 architectures.It is reported about using 5nm production technology and multi-chip layout, combined with next-generation Infinity Cache memory.It is not specified whether the latter will be somehow optimized in terms of performance or limited to an increased amount.Navi 3x family GPUs will undergo architectural improvements to improve performance.AMD cautions that predictions on the value of the increase in specific performance are based on preliminary engineering calculations, and therefore actual test results may differ.