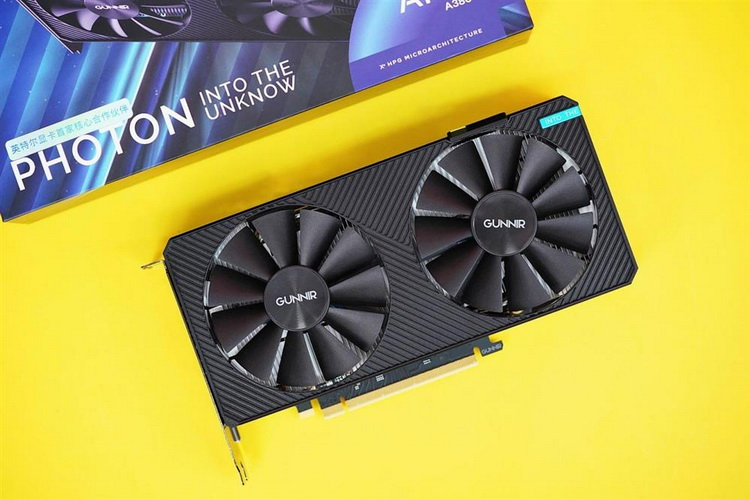 First Intel Arc Alchemist desktop graphics card has officially gone on sale.But only in China for now.Many Chinese media have published their reviews of the novelty, comparing it with competitors.Yesterday from the first similar publication it was clear that Intel Arc A380 is weaker than its main competitor Radeon RX 6400.New reviews only confirmed these conclusions and also showed that the new graphics does not get along too well with AMD Ryzen chips.Image source: MyDriversThe Arc A380 Photon OC graphics card from Gunnir took part in all tests.At the moment this is the only brand that has released a non-reference variant of the Intel gas pedal.This version of the graphics card has an overclocked GPU (2450 MHz instead of the reference 2000 MHz) and slightly higher (92 W vs.standard 75 W) level of power consumption compared to the reference version.Image source: MyDriversWccftech has got official Intel data, in which the company itself compares Arc A380 with GeForce GTX 1650 and Radeon RX 6400.According to the table, Arc A380 is weaker than both graphics cards mentioned above. The Arc A380's official performance data.Image source: Intel / WccftechPortal MyDrivers pitted the Arc A380 against the GeForce GTX 1050 Ti so that the new model has at least some chance of winning.And in this case, in almost all games, the Intel card was indeed faster than the GeForce model, released back in 2016.Image source: MyDriversAs some reviews have shown, the performance of Arc A380 in systems with AMD processors was lower than in similar systems based on Intel.For example, in combination with AMD Ryzen 5 5600, the gas pedal proved to be 17% worse than in a PC based on Intel processor of the same level.It's likely that this is why Intel recommends using the Arc A380 only in ResizableBAR-enabled PCs and does not guarantee the Arc A380's full performance on systems with similar AMD Smart Access Memory technology. Intel Arc A380 performance combined with an AMD processor.Image source: BilibiliAccording to various sources, the Intel Arc A380 can be found at Chinese retailers for 1,399 to 1,499 yuan ($210 to $225), which is more expensive than its recommended price, which is about $150, and more expensive than the Radeon RX 6400.Some retailers offer the Arc A380 as part of off-the-shelf systems based on older 10th generation Intel Core processors.