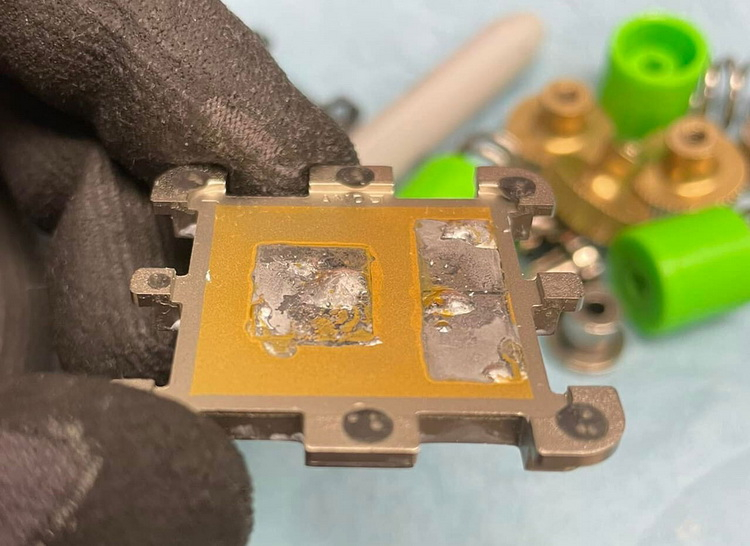 Although the release of Ryzen 7000 desktop processors on the Zen 4 architecture will not be until this fall, in closed circles of computer enthusiasts these chips are already taken apart literally to the bone.Portal TechPowerUp has shared a photo of the removed heat dissipation cover of an unknown model of AMD's next-generation processor.Image source: TechPowerUpIt's very likely that the photo above should not have been released to the public.The photo appears to have been shared by someone in one of the closed groups for overclockers, where it \"leaked\" from.That's why TechPowerUP doesn't name names or provide a link to the original publication.Apparently, the process of dismantling the new heat spreading cover of a very unusual shape will not be an easy task.If you look at the image below, we can note that the SMD-components of the processor have been moved outside of the area of the processor chips and are in close proximity to the edges of the cover, which increases the risk of damaging them during scalping.Source image: AMDThe source does not provide information on whether the chip works after this operation.However, it can be noted that solder is used as a thermal interface between the cover and the crystals. Image source: MSIThe Zen 4 cores in Ryzen 7000 processors will be placed in two 8-core crystals, which will be produced according to the standards of the 5-nm process.The third chip with I/O interfaces will be made according to the 6-nm process.It will contain RDNA 2 integrated graphics core as well.