China has released a tower cooler for M.2 SSDs - it can more than halve the temperature 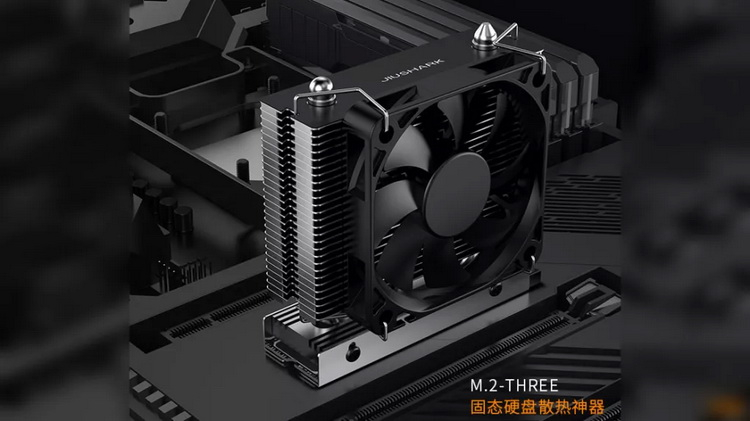 Chinese computer component manufacturer JiuShark has released a tower cooler for M.2 form factor NVMe SSDs.Called the JuiShark M.2 Three, the new product has two heat sinks, a heat pipe, and is also equipped with a fan.Image source: JuiSharkThe fastest NVMe drives have a tendency to overheat.With the arrival of models equipped with the new PCIe 5.0 interface, which can deliver speeds up to twice as fast as PCIe 4.0 models, this problem may become even more acute.JiuShark claims its new JuiShark M.2 Three is capable of reducing the temperature of a solid state NVMe drive by over 50%.The JuiShark M.2 Three is 82mm high, 35.5mm thick with the fan, and 74.5mm long.The company has included its own 60mm diameter fan that runs at speeds up to 3000rpm, provides airflow up to 23.7 m3/h and has a noise level no higher than 25.4dBA. The cooling system includes an aluminum block to mount the NVMe drive, which is connected by a heat pipe to a 27-rib aluminum radiator.The contact surface of the bottom heat sink and heat pipe is CNC aligned for better thermal conductivity.The total weight of the cooling system is 113 grams.The graphs below show the temperature of the NVMe drive with the active cooling system (bright green bar), without the fan (dark green bar), and without the fan and radiator (orange).The test used a 500GB Samsung 980 Pro at 25 degrees Celsius ambient temperature.The upper graph shows the temperature of the NAND flash memory chips, and the lower graph shows the temperature of the SSD controller. The JuiShark M.2 Three cooler is available in two versions: graphene-painted (black) and unpainted.The black version is priced at $13.30, the regular version at $8.80.