Details about Intel's Meteor Lake mobile processors have been revealed - three types of cores in one processor, new graphics and PCIe 5.0 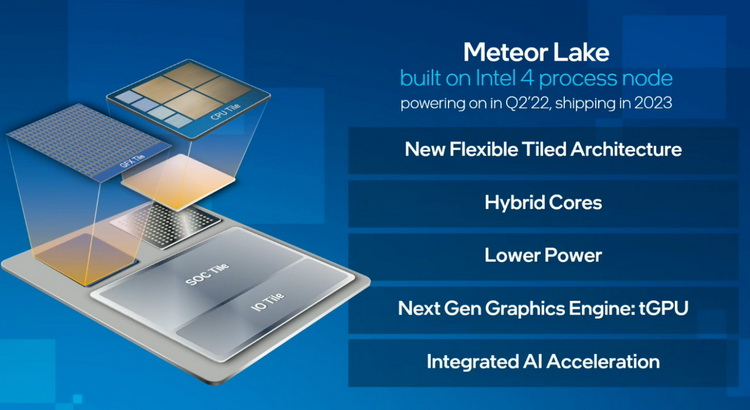 Igor's LAB portal has published the first details about the upcoming 14th generation Intel Core mobile processors, codenamed Meteor Lake.The resource has shared a few diagrams highlighting the most important details about the future chips.It became known that Intel will release mobile Meteor Lake series H, P and U - they have different levels of TDP and are designed for laptops in different segments.Image source: IntelThe Meteor Lake mobile chips will reportedly get a new type of energy-efficient cores LP E-Core.Apparently, the question is about the Low Power Efficient Core - the least powerful cores, which will become another link in the hybrid architecture of the 14th generation Core processors.The rumors that Intel is going to use three types of cores in future chips have been circulating for some time.If true, the Meteor Lake architecture will resemble the current Arm approach, where one chip also uses three types of cores. Image source: Igor'sLABAccording to other sources, the third type of Meteor Lake cores will not be contained inside a computing chip (tile or chiplet), like high-performance P cores and energy-efficient E cores, but inside a separate SoC chip.According to Igor's LAB, the Meteor Lake-H and Meteor Lake-P processors will be the first Intel consumer processors, which will use a hybrid architecture consisting of several chips (tiles), built using different chipset technologies, and will offer up to 14 cores (6 P-core and 8 E-core).In turn, the Meteor Lake-U series models will get up to 12 cores.It is also known that the new architecture will support DDR5-5600 and LPDDR5/LPDDR5X-7467 RAM.Meteor Lake-based systems will be able to offer up to 96GB of DDR5 RAM or up to 64GB of LPDDR5 RAM. Source image: Igor'sLABIt also became known that Meteor Lake will receive a new architecture for integrated graphics - Intel Xe-LPG.In the documents it is mentioned under the name Xe2.Meteor Lake-H, P and U processors will receive up to 128 execution units of embedded graphics.It is not known at the moment whether Xe2 is a representative of the Battlemage gaming architecture, which will replace the current Alchemist graphics or whether it will be some new improved power-efficient version of Alchemist.Meteor Lake-H mobile processors, which will be used in powerful gaming notebooks, will get support for up to eight PCIe 5.0 lines.There is no mention of PCIe 5.0 support for the persistent memory subsystem.Information available to Igor's LAB also confirms that the 14th generation of Intel Core processors will debut in the second half of 2023.